St. Luke is quite special. Not only was he the only Gentile to write books of the Bible, but he was a close companion of St. Paul. If St. Paul succeeded in evangelizing the western Roman empire, Luke may have had more to do with it than we know. It is likely that God used his medical skills to keep St. Paul alive some of those times when he was beaten, stoned, or half-drowned. 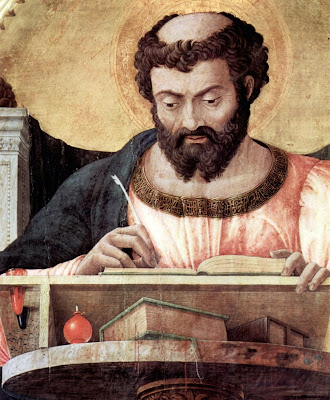 St. Luke is special, too, because he is the first Christian physician on record. Untold thousands have followed in his steps. Physicians can look to St. Luke as an example, but so can historians, because his writings are very much in the Greek tradition. Painters claim him for their brotherhood, too, because tradition holds he painted a picture of the Blessed Virgin which hung in the Santa Maria Maggiore in Rome.

As a physician, Luke must have been curious about the medical conditions behind Christ's miracles. As a matter of fact, Luke uses more medical terms than any other New Testament writer. For example, he doesn't just say Publius' father was sick: he tells us he suffered from fever and dysentery. The apostle Paul told us that Luke was a doctor. In fact, he called him "dear doctor Luke." Given his use of medical detail in the two books he wrote for the Bible, The Gospel According to Luke and The Acts of the Apostles, we might have guessed it ourselves.

Luke pulled back the curtain on the young Jesus more than any other gospel writer. Without him we would not know anything about the boy Jesus's thinking. It is a pretty safe bet that Luke interviewed the Blessed Virgin Mary and got most of the details from her. Perhaps he even heard the Magnificat, recorded in his gospel alone, from her very own lips. October 18 is the great doctor's feast day in churches that observe such traditions.

Tradition tells us that St. Luke was the son of pagan parents, possibly born a slave, and was one of the earliest converts. Legend has that he was also a painter who may have done portraits of Jesus and His Mother, but none have ever been correctly attributed to him. This story, and the inspiration of his Gospel, has always led artists to his patronage of them. St. Luke traveled with St. Paul and evangelized Greece and Rome with him, being there for the shipwreck and other perils of the voyage to Rome. St. Luke wrote the Gospel According to Luke, much of which was based on the teachings and writings of St. Paul and his own experiences. He also wrote a history of the early Church in the Acts of the Apostles. He was a martyr.
Posted by Province of Meribah at Friday, October 18, 2013