The Lord needs it 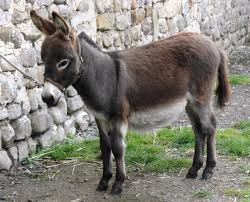 In the first-century Roman world, emperors always made their arrival in a city with a great deal of pomp and circumstance. Elite troops carried Roman standards — the equivalent of big, bold letters on a plane. The emperor himself entered the city riding on a warhorse, the ancient forerunner of a jet, or in a chariot, which acted like an ancient armored limo.

Jesus, however, eschews the decorations and instead has a donkey commissioned as his royal mode of transport. And it isn’t even a full-grown donkey; it’s a "colt"— four spindly legs vs. the powerful hooves of a horse.

Jesus does have the disciples act a little like a first-century messianic Secret Service when they go to pick up this diminutive donkey, giving a kind of secret code word: "The Lord needs it."
Posted by Province of Meribah at Saturday, March 23, 2013