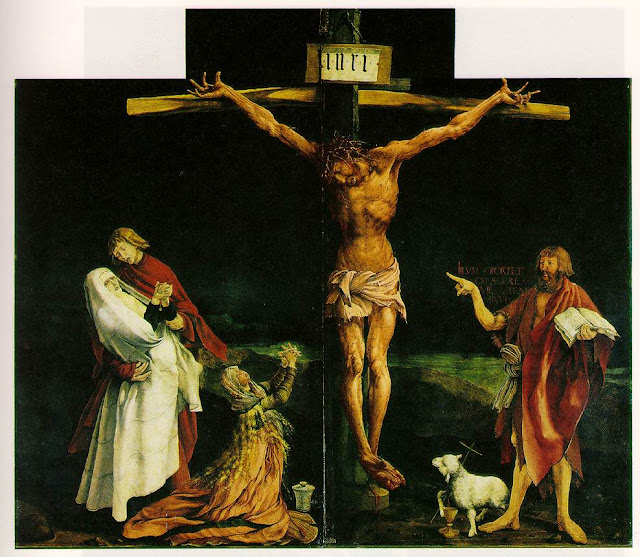 The one crucifixion painting that moves me the most is the one painted by Mathias Grünewald. If we can only comprehend what the crucifixion looked like, this is it. The painting actually forms part of the central panel of the Isenheim altarpiece, painted between 1510 and 1515.

Like a preacher at Good Friday, Grünewald left nothing undone to bring home to us the horrors of this scene of suffering: Christ's dying body is distorted by the torture of the cross; the thorns of the scourges stick in the festering wounds which cover the whole figure. The dark red blood forms a glaring contrast to the sickly green of the flesh. By His features and the impressive gesture of His hands, the Man of Sorrows speaks to us of the meaning of His Calvary. His suffering is reflected in the traditional group of Mary, in the garb of a widow, fainting in the arms of St John, to whose care the Lord has commended her, and in the smaller figure of St Mary Magdalene with her vessel of ointments, wringing her hands in sorrow. On the other side of the Cross, there stands the powerful figure of St John the Baptist with the ancient symbol of the lamb carrying the cross and pouring out its blood into the chalice of the Holy Communion.

Posted by Province of Meribah at Saturday, March 30, 2013