Today is Good Friday, and it's the one day above all others when the Cross takes center stage. Certainly in the Scripture readings, the cross , the literal wooden object to which Jesus was nailed and upon which he died -- cannot be escaped. But also present in the reading is the Cross -- the symbolic emblem that is now the most recognizable mark of the Christian faith and is a major hinge point of our theology. 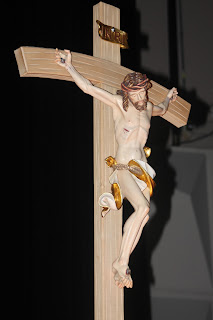 But a hinge point indicating what? If you look up "cross" in The Dictionary of Bible and Religion, all you find is:

- the Cross is "an emblem of suffering and shame ... where the dearest and best for a world of lost sinners was slain"?

- the Cross is emblematic of a fate we all deserve because of our sins but which we don't have to face because Jesus faced it for us by taking our place and thus "satisfying" our debt to God?

- It is the place where Christ confronted the power of demons who first appeared to have won but who, come Easter morning, were shown to have lost?

- Is it a supreme symbol of God's love for us? Is it God sacrificing himself for the human race?

- Is it simply the preferred method of execution in the Roman Empire, to which Jesus was unjustly sent for confronting the shortcomings of the established religious leaders?

All those explanations and more have been proposed, argued and, in some cases, even fought over in the centuries since Jesus' death occurred.
Posted by Province of Meribah at Friday, March 29, 2013