Pray for us St. Benedict 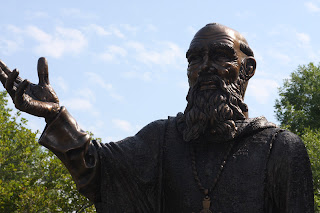 Pius XII wrote about our saint for today:

Like a star in the darkness of night, Benedict of Nursia brilliantly shines, a glory not only to Italy but of the whole Church.

We do know he is the twin brother of St. Scholastica, Abbess of Plumbariola, and Foundress of the "sister" Order of Benedictines.

St. Benedict is the Patron of:

* Monks
* against fever
* against gall stones
* against inflammatory diseases
* against kidney disease
* against nettle rash
* against poison
* against temptations
* against witchcraft
* agricultural workers
* bee keepers
* cavers
* civil engineers
* coppersmiths
* dying people
* Europe
* farm workers
* farmers
* Italian architects
He is the  Founder of the Benedictine Order, known as the father of Western Monasticism as most monks today still follow his rule. In his time he founded twelve small monastaries, the most famous of which is Monte Cassino, the "cradle of the Benedictine Order, which housed at one time or another such great saints as:

There are a bazillion other saints hailing from the Benedictine Order!

St. Benedict's iconography often shows him, with an abbot's staff and a raven, since it was a raven that brought him his daily bread while he lived as a hermit in the desert. Jealous monks one (at least) tried to poison St. Benedict's wine, but at the sign of the cross over the goblet, it shattered, saving the abbot from the poison. This is the meaning of the snake within the goblet. Known for his gift of prophesy, St. Benedict is also shown with a closed book, indicating the mystery of his knowlege.

Things to do for the feast:

* Order your own copy of the original Rule of St. Benedict.
* Get a copy of Louis de Wohl's novel of St. Benedict, Citadel of God
* Since St. Benedict is the patron of beekeepers, you could read up today on bees and bee keeping this day.

* Learn about the medal of St. Benedict.

* But, the best thing to do on the Feast of St. Benedict is follow his motto: Ora et Labora ~
Work and Pray.
Posted by Province of Meribah at Wednesday, July 11, 2012