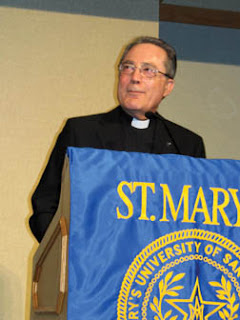 The delegates of the 34th General Chapter of the Society of Mary (Marianists), which is currently in session at the Society’s General Administration in Rome, have elected Manuel J. Cortés Soriano to a second term as Superior General.

Following the celebration of the Eucharist and invocation of the Holy Spirit for the election before them, the delegates from all Marianist Units throughout the world met in General Assembly for voting. At the Eucharist, presider and homilist, Fr. José María Arnaiz, S.M., called on the delegates to listen to the Spirit and to reflect upon the current needs of the congregation and who might best be called to leadership at this time. Later, Fr. Manuel was re-elected.

Born in Valencia, Spain in 1945, Fr. Manuel entered the novitiate of Society of Mary in 1961. On September 12, 1962 he professed his first vows in Elorrio. Following several years of study, and some time teaching, he entered the Marianist Seminary in 1970 and was ordained on March 24, 1974 in Fri- bourg, Switzerland.

Throughout his more than forty years as a Marianist, Fr. Manuel has served as local community superior, school chaplain, Master of Novices and parish priest. In addition, he was Provincial of the former Province of Zaragoza from 1989-1997. Fr. Manuel holds advanced degrees in Physical Sciences and Theology. He is the author of several books. He also has the ability to communicate in several languages, including English, Spanish, French, Valenciano, Catalán and Italian.

He was elected as the thirteenth successor to Blessed William Joseph Chaminade on July 21, 2006. During his first term, he visited all of the Units of the Society of Mary, met personally with almost every member, and presided over the General Council in its work of leading and governing the Society. Fr. Manuel will serve a second term of six years. He, along with three General Counselors who are soon to be elected, will serve as the leadership team of approximately 1200 members of the Society of Mary.
Posted by Province of Meribah at Saturday, July 14, 2012