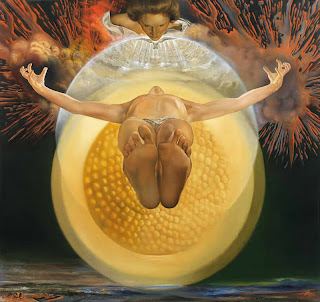 There are a number of paintings depicting the Ascension of the Lord which feature a group of disciples staring up at the heavenly hosts awaiting the Lord's return to the Father. Dali's contemporary rendering is to the left, Kulmbach's classical version is below on the right.

The Ascension is celebrated this Thursday where we live -- for some this coming Sunday.

The Preface prayer for the Ascension offers a brief theological summary of what the Church celebrates on this 40th day after Easter. Check out the verbs. The theology is in the verbs! 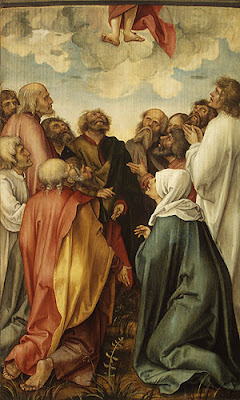 Father, all-powerful and ever-living God, we do well always and everywhere to give you thanks and praise. For the Lord Jesus, the king of glory, the conqueror of sin and death, ascended to the highest heavens, as the angels gazed in wonder.

Mediator between God and man, judge of the world and Lord of hosts,  he ascended not to distance himself from our lowly state but that we, his members might be confident of following where he, our Head and Founder, has gone before. Therefore, overcome with paschal joy, every land, every people exults in your praise and even the heavenly Powers, with angelic hosts,
sing together the unending hymn of your glory, as they acclaim: