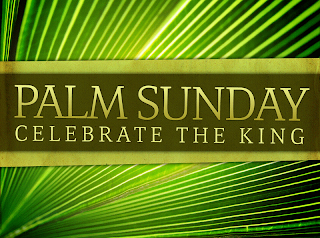 Palm Sunday takes a Celebrity Christ and gives him the celebrity treatment as he enters Jerusalem. All the expected elements are in place: He makes a royal entrance, in a procession similar to powerful kings and conquering generals. He is escorted by the citizens of Jerusalem and the whole multitude of his disciples. They wave these palm branches, praise him for his deeds of power, and sing hymns of acclamation, crying out, "Blessed is the king who comes in the name of the Lord! Peace in heaven, and glory in the highest heaven." He rides on a colt just as King Solomon did before his coronation, although Jesus' choice of a donkey could also mean that he is a bringer of peace. If Jesus wanted to fight, he would have charged in on a stallion or a war horse.

So Jesus is a superstar, complete with glitter, glamour and gossip. He's got the glitter of a royal entrance, the glamour of waving palm branches and even the gossip associated with his disciples and the borrowed colt. There is a lot of buzz about this celebrity superstar as he enters the Holy City to pick up his prize.
But here is the twist: His prize is a cross and he knew it.
Like modern celebrities, Jesus is not only idolized, he is also picked apart. He is feelin' the love on Sunday; feelin' the disappointment on Monday and the rage on Friday. The machinery that kills him on Friday begins to operate on Sunday. And the disciples sing praises, the Pharisees begin to shout. .
Posted by Province of Meribah at Friday, March 30, 2012