Walk into St. Martin de Porres Marianist grammar school in Uniondale and you're likely to be greeted by a dog named Stella or run into a boxed or caged tortoise, dove or rabbit. 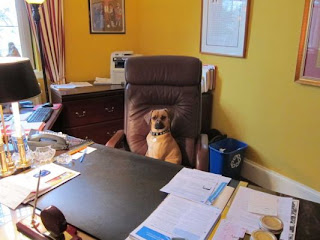 It's all part of the Marianist Brothers' approach to education: creating a homelike environment in the three highly rated Catholic schools they run on Long Island. The others are all-boys Chaminade High School in Mineola and Kellenberg Memorial High School in Uniondale, where even peacocks roam the grounds.

"The life that is brought to the school makes it less of an institution," said John Holian, headmaster of St. Martin de Porres, who also trains dogs professionally. "It creates a tremendous amount of excitement for the children."

While many schools have fish tanks or cages with gerbils, what distinguishes the Marianist schools is the variety and quantity of their animals, and that some of the creatures -- mainly the dogs -- are permitted to freely roam the premises.

"It's pretty cool, like a mini-zoo," said Jalen Severe, 12, a sixth-grader at St. Martin Porres, adding his favorite animals are the doves.

One dog, a pug-and-beagle mix named Buster, hangs out for most of the day in the office of Chaminade's president, Brother Thomas Cleary. The dog even sits on the chair at Cleary's desk when the urge strikes and the president isn't occupying it. 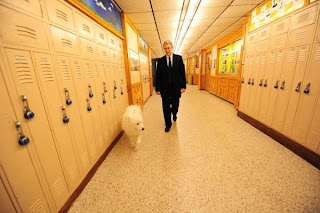 Buster sometimes follows Cleary down the hall when it is time for him to teach a religion class, and will promptly say "hello" to the class by sniffing everyone's shoes and backpacks, hunting for a treat.

"If a kid has a sandwich in his backpack, he will smell that out within seconds," Cleary said. Usually Buster settles down as the class proceeds, chewing on one of his toys or someone's backpack. Sometimes he plops himself into one of the desks like a student.

Stella, a boxer, accompanies Holian to school each day, too. When they arrive, "I make a right, she makes a left, then we meet up at 5 o'clock," he said.

The religious brothers say the animals have brought clear benefits to the schools. The dogs help create a relaxed environment and serve as easy ice breakers for conversation.

"We want the students to feel like this is a second home to them," said Brother Kenneth Hoagland, Kellenberg's principal, adding, "Part of our philosophy of education is to educate not only the mind but the heart."

State law permits animals to be in schools, as long as they are properly cared for, according to the state Education Department. 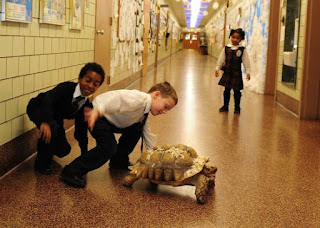 At the Marianist schools, the brothers themselves, along with Holian, are mainly in charge of tending to the dogs and some of the other animals.

Students pitch in, taking the dogs for walks or feeding and maintaining the other animals.

The brothers have had animals in their schools since the early 1970s.

The practice started initially because the brothers live in a building adjacent to Chaminade and it seemed natural to bring their pet dogs to work next door.

Mishaps involving the animals have been rare. Cleary said a soccer game at Chaminade once had to be stopped briefly when a French bulldog named Moses decided to run onto the field to grab the ball.

But generally the dogs are well-behaved -- and appear to immensely enjoy their lives, Cleary said.

"It can't be much better than this, if you're a dog," he said. "Your backyard is a football field -- a turf field no less, so they don't have to get their feet dirty."
Posted by Province of Meribah at Tuesday, March 20, 2012