The One was Jesus! 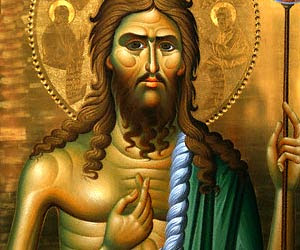 John the Baptist was human roughage. But Jesus called him a prophet.
John the Baptist was full of the Holy Spirit. That is why his words hit home with so many. But he knew there was a greater power and greater effectiveness than he could ever have.
For however much he was inspired by God, he could never send that Spirit into anyone. Could he cause them to put their sins behind them? Yes. Or strive to be holy? Yes. But he could not give them the presence of God. He could only tell them to prepare for the One who could and would give it.
It was John's job to tell of the One to come, the Messiah, the One who would send the Holy Spirit into those he baptized. One whose words and deeds would have even more impact than John's. One that John knew as friend and family, whom John had already come to respect and highly value, but didn't know as the One. The One was Jesus.
Posted by Province of Meribah at Sunday, December 06, 2009