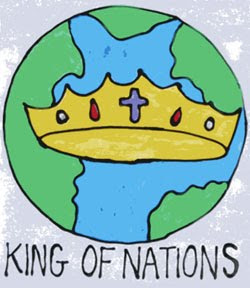 O KING OF ALL NATIONS,
the only joy of every human heart: O Keystone of the mighty arch of man. Come and save the creatures you fashioned from the dust.

Lord, every nation on earth adores You, for by Your passion, death, and resurrection, You have saved all humanity. Your constant love and friendship reach from the heavens to the ends of the earth. You alone have bridged the deep chasm created by sin; You have protected us from the grasp of the evil one. You are the source of all life; help us to be as one family in You, our God and Savior. Amen.

Christmas is just around th corner. And so, what is it that we celebrate at Christmas?

We surely celebrate the birth of a child, but not that of a common child, rather, it is a Child who is God. Now, if we compare this birth with other births, for example, with the births of other children, then we notice some strange things. This child is born in unusual circumstances, disconcerting, even annoying circumstances – since it has to do with the Son of God.

There was no press conference to announce to the world an event of such significance. Nevertheless, he was greatly interested that someone would know. Someone had the right to be the first to know the news. He sends his messengers to some shepherds who were camped near the city guarding their flocks. The shepherds live on the margin of society and also often on the margin of religion. They are uneducated and they do not know the law. It is precisely to these to whom Christ sends his angels to announce his coming.

Jesus wants to make everything clear from the beginning. He sees everything in reverse. In his eyes, the great ones are the small ones. The last are the first. Those shunned by society are his privileged. The Good News is communicated first and first belongs to those who are “on the outside.”

Posted by Province of Meribah at Tuesday, December 22, 2009