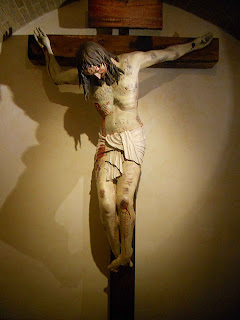 This week we have focused on the customary blessing of animals on St. Francis Day. The following passage from Bonaventure's Life of Francis is worth recalling:

“One day when Francis went out to meditate in the fields he was passing by the church of San Damiano which was threatening to collapse because of extreme age. Inspired by the Spirit, he went inside to pray.

Kneeling before an image of the Crucified, he was filled with great fervor and consolation as he prayed. While his tear-filled eyes were gazing at the Lord's cross, he heard with his bodily ears a voice coming from the cross, telling him three times: 'Francis, go and repair my house which, as you see, is falling into ruin.'

Trembling with fear, Francis was amazed at the sound of this astonishing voice, since he was alone in the church; and as he received in his heart the power of the divine words, he fell into a state of ecstasy. Returning finally to his senses, he prepared to put his whole heart into obeying the command he had received.

He began zealously to repair the church materially, although the principle intention of the words referred to that Church which Christ purchased with his own blood, as the Holy Spirit afterward made him realize....”

For the record, the moment recounted above took place in 1204... yet then as now, the call of the Cross remains the challenge of our time. So as the work continues, and another St Francis' Day has passed, may we all ever just keep on, keep trying and -- flaws, faults, warts and all -- keep building.
Posted by Province of Meribah at Sunday, October 06, 2019