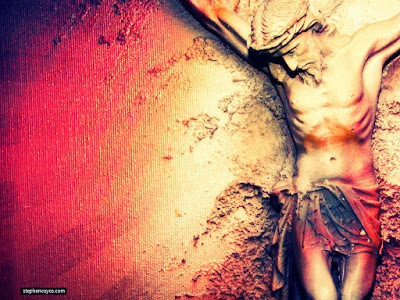 Today's story appears to describe something that had really happened. A steward is accused by his employer of embezzling his property. The steward is sent for and fired.

The steward knows that a lot of people owe his former employer huge amounts. He calls in the debtors and asks the first, "How much do you owe my master?" "One hundred measures of olive oil," he answers. The steward tells him, "Here is your promisory note. Sit down and quickly write one for fifty." The debt has been reduced from 3650 litres of oil to about 1825 litres, the equivalent of a year's salary. He calls in a second man who owes his former employer a hundred measures of wheat (about 27 tons, the harvest from more than 42 hectares of good land). His debt is reduced to 80 measured (a good five tons less!).

The steward displays a certain shrewdness. Those debtors will never forget his generosity and will certainly welcome him into their homes. Jesus concludes the story by praising the steward for his cleverness.

Before going on let's say that to praise someone's shrewdness is not to approve what that person does. It seems rather unlikely that a man cheated out of so much oil and wheat would not try to recover it. If he praises his former steward, it probably means that he lost nothing. So it must have been the steward who had to give up part of what was owed to him and not his employer. He gave up some of his own property in order to find friends. This is the point.

The parable is followed by some sayings of Jesus, all about the use of riches and they complete the teaching of the parable. The first saying is, "The children of this world are more prudent in dealing with their own generation than are the children of light."

After expressing his admiration for the steward, Jesus makes the comment that his disciples are not as astute as others in matters of money and business, who often resort to dishonesty. Unfortunately, we have quite a few Christians who could compete with anybody in this regard.

This is the most important verse in today's text. It summarises the whole teaching of the parable. "I tell you, make friends for yourselves with dishonest wealth, so that when it fails, you will be welcomed into eternal dwellings."

Jesus calls wealth "dishonest," that is, acquired through deceitful means. Jesus is showing us how to turn dishonest wealth into good wealth.

The steward's cunning lay in his ability to use his "wealth" to make friends.

Jesus is trying to tell us that we are not the masters but the stewards of earthly goods, which belong to God.

How do we look after the goods of the Lord?
Posted by Province of Meribah at Sunday, September 22, 2019