Holy Name of Mary - Patronal Feast of the Society of Mary 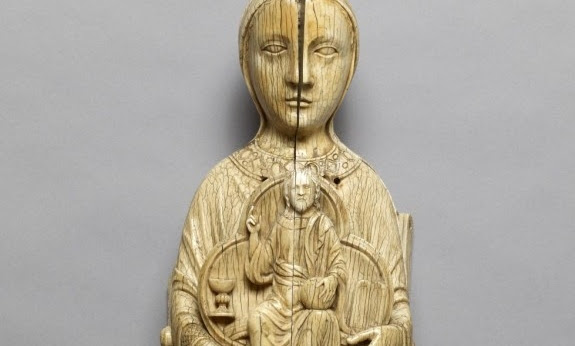 As grateful as I am that museums preserve Catholic art, I cannot spend time in religious exhibitions without feeling a certain melancholy. Stripped of their original context (church or chapel) and of their original viewers (praying Catholics), these works often fail to evoke in me admiration, let alone devotion.

And yet, as I wandered through the medieval section of the Walters Art Museum in Baltimore, glancing at old, ornate reliquaries and sadly displaced stained glass windows, I came across a statue of Mary that stopped me where I stood. She was not quite two feet tall, carved in ivory, standing there on a pedestal. A line cut straight down the front of the statue, from the crown of her head to her feet, and on both of her sides there were hinges. The statue stood open like a little triptych—a three-piece altar panel. Inside the statue, the sculptor had carved scenes from Good Friday and Easter Sunday, and in the place where Mary’s heart would be, in the middle of the “triptych,” stood a scene of the crucifixion. 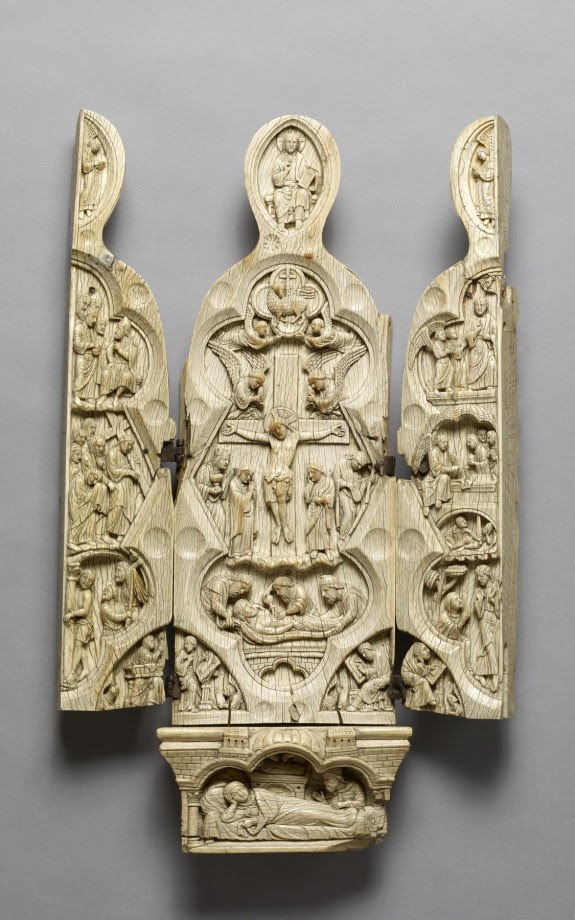 The whole statue serves as a commentary on Luke 2:19: “Mary kept all these things, pondering them in her heart.” It offers a speculative peek into the interior life of the Mother of the Savior after that first Easter. She now pondered not only the infancy, not only those long, hidden years in Nazareth, but the suffering, the death, and the resurrection of her Son. And the crucifixion, that raw memory of agony, takes center place.

In a sense, she was prepared for those pierced hands and side. François Mauriac, in his Life of Jesus, reflects on those moments in Jesus’ life when he seems to draw apart from Mary—for example, when the twelve-year-old Son disappears for three days, leaving his mother anxiously searching. Normally so close to her,

suddenly he was like a stranger. Mary knew this had to be. . . . Here below, perhaps, he sometimes treated her as he still treats his chosen ones whom he has marked for holiness and who, behind their grilles, in their cells, or in the midst of the world, know all the appearances of abandon, of being forsaken, not without keeping the interior certainty of being his elect and beloved. (11)

The way Jesus loved Mary did not conform to the ways of the flesh. His love for her, as for all of us, led her on the way of the cross. In the Gospels, we catch glimpses of Mary watching her Son, wondering at why he acts as he does. All these moments find their fulfillment in the crucifixion, where God revealed his love to the world. And Mary, whose faith never faltered, gave her heart to be pierced too.

Today we celebrate the Holy Name of Mary. Her name is holy because she is set apart. We can exalt her high position in heaven, her perfect obedience and conformity to God’s will, and her glorious titles. Her heavenly greatness is all the more moving when we contrast it to the somewhat ordinary life she must have appeared to live. But if we asked her to explain, she would point to her Son.

I walked away from this little statue with a new, Marian-inflected appreciation for St. Paul’s paradox: “I have been crucified with Christ; it is no longer I who live, but Christ who lives in me” (Gal 2:20). Sometimes a small piece of ivory, dropped down in the middle of other medieval bric-a-brac, can bear the weight of divine mysteries.

Posted by Province of Meribah at Thursday, September 12, 2019