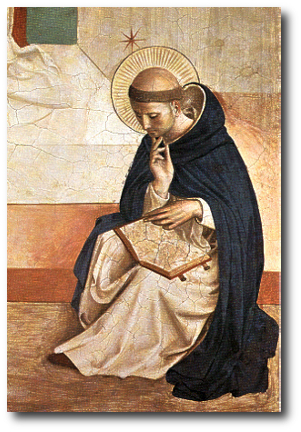 In the twelfth canto of the Paradiso, when Dante begins to speak of St. Dominic and of his passion to proclaim the word of truth, he speaks of him not only as an educated man and preacher of the gospel but almost as a force of nature: ‘Then with both learning and zeal (con dottrina e con volere) and with the apostolic office, he went forth like a torrent driven from a high spring.’ Dominic’s own contemporaries were themselves well aware of the preacher’s utter dedication to his task. One witness at the canonization process remarked that Dominic was ‘so enthusiastic as a preacher that by  ay and by night, in churches, houses, fields, on the road, everywhere, he wanted to preach the word of the Lord and he encouraged the brethren to do the same and not to talk about anything except God.’ His compassion extended, we are told, ‘not only to the faithful, but also to pagans and unbelievers and even the damned in hell, and he wept a great deal for them.’

Dominic, it is clear, possessed a strong instinct for adventure. He was daring both by nature and by grace. Dante calls him ‘il santo atleta,’ the holy athlete. No matter how difficult or unforeseen the challenge of the hour, he was not afraid to take enormous risks for the sake of the Gospel. It is hardly surprising, therefore, that within a few years it could be said of the young friars who followed in his wake, and whom he himself had dispersed far and wide to preach the gospel, that they had made the ocean their cloister. But was this spirit of risk and adventure reflected in the intellectual life of the first Dominicans? Study, we know, was given a place that was unheard of before in the history of religious life. It was no longer simply one exercise among others. It was now a central and sacred task. But, in terms of actual content and imaginative range, how striking and original were the studies of those first friars? The principal point to be made in answer to this question is that the early Dominicans were not attempting to be ‘striking and original’. Their studies were shaped by the needs of others, and given the nature of the crisis at that time, what was most urgently required for the task of preaching and the cura animarum was straightforward moral and doctrinal catechesis. Dominicans were, of course, subsequently to be and the forefront of ‘the new learning’ in most of the great universities in Europe. But that was a development which came slowly, and far more so, perhaps, than most scholars realized until recently.