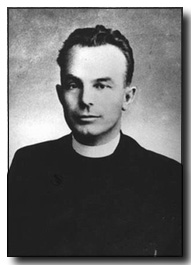 On Nov. 9, 1942, Jakob Gapp crossed into southern France from Spain in a car with two friends who a few months earlier had asked him, a Marianist priest from Austria, to instruct them in the Catholic faith. In a complex covert operation, he was arrested by the pro-Nazi Vichy government in France, interrogated briefly, and transferred to a prison in Berlin.

The Gestapo decided not to send him to Dachau, their camp of choice for arrested priests. He was a dangerous prisoner who needed “special protective custody.” Later, a People’s Court trial that lasted less than two hours sentenced him to death commenting: “He will forever be without honor.”

The evening of Aug. 13, 1943, 13 years to the day that Gapp had joined the Marianists, he wrote a letter to his superior, concluding, “today I hope to begin the life of eternal happiness.” Then, he went calmly to the execution shed of the Plötzensee prison and was beheaded, earning, not Nazi honor, but eternal honor.

The whole operation was eloquent testimony to the relentless surveillance and pursuit of troublesome Catholics by the Nazi regime. Father Gapp had reluctantly gone into exile. After an anti-Nazi sermon in his parish church at Wattens, Austria, he had managed to escape to the Church of La Madeleine, in Bordeaux, where William Joseph Chaminade had founded the Marianist Order in the early 19th century. Even there his activities were monitored. Before long, his order re-assigned him to Spain, where the Germans could reach him.

Ironically, the Nazis used a Jewish ploy to apprehend Gapp. The two “friends” with whom he traveled were, in fact, Nazi agents pretending to be German Jews. In the official minutes of his interrogation, Gapp admitted that after the 1938 Nazi annexation (Anschluss) of Austria he got into trouble for his public statements opposing government encouragement of hatred and murder of Czechs and Jews as contrary to the “Christian-Catholic position.”

One of Gapp’s students remembered him as teaching that, even more broadly, the law of Christ demanded that “one must selflessly assist anyone, even one’s ideological opponent, if he is in existential trouble or difficulty.” Father Gapp practiced what he preached. In addition to standing up for despised groups, he deprived himself of necessities like fuel for heating in winter in order to help the poor. Gapp knew that people who approached him for moral advice or formal instruction might be Nazi agents, but decided early on that his status as a priest demanded he tell the truth whatever the consequences. He was beatified in 1995.

Most people today associate the rise of Nazi Germany with the Jewish Holocaust. A few celebrated Protestant figures such as Martin Niemöller and Dietrich Bonhoeffer are credited with authentic Christian witness against the Nazis to the point of martyrdom. But this standard account overlooks the many Protestants and Catholics martyred for expressing Christian views that challenged the Third Reich.

Among German Catholic priests alone, the record is quite remarkable. In 1932, just prior to the Nazi rise to power, there were about 21,000 Catholic priests in Germany. Of these, more than a third (over 8,000) clashed with the Reich and several hundred have been documented as having perished at Nazi hands. No doubt others, who will forever remain unknown, were martyred as well.

We know, however, that Nazi camps contained at one point or another, 2,670 priests from Albania, Belgium, Croatia, Czechoslovakia, Denmark, England, France, Germany, Greece, Holland, Italy, Luxemburg, Norway, Poland, Serbia, Slovenia, Spain, Switzerland, Yugoslavia and other countries. Of these, almost 600 died in the camps, another 325 died during so-called “transport of invalids” to other sites, a euphemism for secret execution. Two bishops — Michael Kozal of Poland (brutally tortured after being arrested merely as a potential anti-Nazi leader and since been beatified) and Gabriel Piguet of Clermont-Ferrand in France — also perished in Dachau.

The Nazis gave various reasons for imprisoning these clergymen: stirring up the masses, spying, aiding prisoners, suspicion of treason, behavior unfriendly to Germany, support of Jews, insulting the Fuhrer or National Socialism, or sometimes no reason at all. One was sentenced for telling schoolchildren: “Love your enemies.” Twelve were rounded up after reading the “Lion of Münster,” Bishop Clemens August von Galen’s condemnation of euthanasia, from the pulpit. Father Otto Neururer arrived in Dachau “for hindering an Aryan marriage” and died at Buchenwald for agreeing to instruct a fellow prisoner (really a spy) in the faith. According to some fellow prisoners, he had been crucified upside down for thirty-six hours.

Father Karl Lampert, the pro-vicar of Innsbruck, was picked up and shipped to Dachau for the mere fact of announcing Neururer’s death. The president of the court that heard his case shot himself in the head rather than be an accomplice in the trial. Put into isolation, Lampert was interrogated brutally. After that, he was never heard from again.

Many similar stories exist. Only deeper historical research in several nations may some day give us a sense of the true enormity of the crimes committed by the Nazis against Catholics.

Robert Royal
Posted by Province of Meribah at Tuesday, August 13, 2019