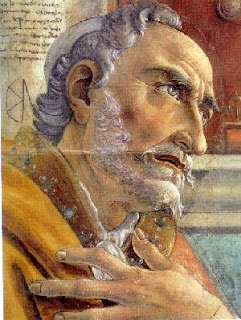 Consistent and continued pressure from Saint Monica assisted Augustine in converting t Christianity. But it was more than her prayers. His exposure to Saint Ambrose in Milan, some disappointing interactions with the leading Manichean intellectuals and perhaps some intervention by the Holy  Ghost also assisted Augustine's becoming a Christian. He decided that he would not only be a Christian, but a priest, which meant celibacy; hence, his famous prayer, "Lord give me chastity and continence, but not yet."

And once fully converted, he returned to Africa, became Bishop of Hippo, and became the leading intellectual in Christendom, writing tirelessly, fighting the big heresies of Arianism, Pelagianism, Manichenism, and Donostianism.
Posted by Province of Meribah at Friday, August 30, 2019