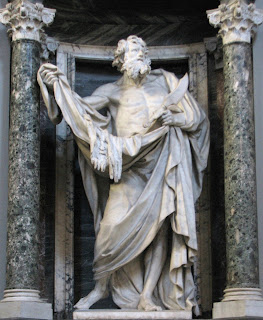 HE was flayed alive—the skin of his body cut into strips, then pulled off, leaving his body open and bleeding for a long time, then beheaded, wrote Fr. Paolo O. Pirlo, SHML, in My First Book of Saints.

Why? Because he was to die the Persian way in the “most barbarous country of the East” in the ancient times; because he converted Polymius, the king of Armenia, to Christianity; because Astyages, the king’s brother, ordered his death; because spreading the Catholic faith is a great crime, noted John Francis Fenion in Saint Bartholomew, Volume 2 of Catholic Encyclopedia.

Then he was beheadead and crucified.

BARTHOLOMEW is derived from Aramaic Bar Tolmay, which means “son of Tolmay,” also known as Nathanael. He was born in the 1st century in Cana, Judea.

One day his friend Philip from Bethsaida told Nathanael, “We have found the one whom Moses wrote about in the Book of the Law and whom the prophets also wrote about. He is Jesus, son of Joseph from Nazareth” (John 1:45).

Bartholomew, characterized as frank and skeptic, was attracted by Philip’s enthusiasm remarked: “Can anything good come from Nazareth?” (John 1:46).

Nevertheless, he went with Philip when he insisted that Bartholomew come and see Jesus.

Seeing him, Jesus announced that Bartholomew is a true Israelite incapable of deceit, that made him ask, “How do you know me?”

Jesus’ answer that he was under a fig tree before Philip called him convinced Bartholomew that Jesus, indeed, is the Son of God and King of Israel. Batholomew witnessed Jesus’ Ascencion to heaven.

To spread the word of God, the apostles were assigned to different countries. Reputed to have introduced Christianity to Armenia (Turkey) with Saint Jude Thaddeus, both are patron saints of Armenia Apostolic church. Saints and Angels by Catholic On-Line states that he also preached in Persia, Egypt and Mesopotamia (modern Iraq), which “cradled the most ancient civilization of human history.” A monastery named after the saint was built on the site of his martyrdom.

HIS body was washed in the waters, and a large part of the skins and the bones were deposited in Lipari, Sicily. Many miracles had been attributed to him in the place.

Foremost of which was when his silver statue was melted on the orders of fascist officials who raised funds to finance World War II.

When the melted silver was weighed, it registered only a few grams so the silver was returned to Lipari. In reality, however, it weighed many kilograms.

On his feast day, the saint’s gold-and-silver statue was carried through town. While men were carrying it downhill, the statue suddenly became so heavy that they decided to put it down to rest.

When they continued the journey the statue became heavier, so the men stopped to gain their momentum. On the third time they rested with the statue, the walls collapsed downhill. Had they carried the image, many would have been killed.

The miracles seemingly involved weight, so he was made the saint of tanners. However, he was also invoked by people to be the saint of butlers, salt merchants, leather industries, shoemakers, bookbinders, Florentine cheesemakers, and people suffering from neurological diseases. Saint Bartholomew’s relics had been deposited in churches named to honor him: his arm in Canterbury, England; skull in Frankfurt, Germany; and body in Lipari.

In 983 some skin and bones were brought to Tiber Church of Saint Bartholomew in Rome.

The Coptic church commemorates his martyrdom on the first day of the Coptic calendar, August 29. Eastern Christianity honors him on June 11, and the Roman Catholic Chrurch on August 24.