God is a great redeemer 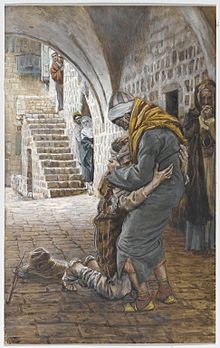 When the boy is still far from home, his dad spies him off in the distance. Setting aside his status as a patriarch and landowner, the father hikes up his robes, and sprints out to greet his son. When the young man begins the speech he'd planned for this moment, his dad isn't listening.

Dad doesn't want to hear about his son's mistakes. He doesn't need the young man to debase himself. Instead, the father is overjoyed. The true treasure he had lost when his son left home has been returned to him.


Calling for robes, rings and fatted calves, the father demonstrates that he sees in his son treasure, not trash. And that very love is transformative.

Many of us can put ourselves in the young man's place. We, too, have a voice inside of us that only wants to dwell on the garbage in our lives. We've made mistakes, and we hear over and over again that, like a discarded bottle or can, whatever was of value inside of us has been poured out.

Thankfully, God is a great redeemer who sees something very different.
Posted by Province of Meribah at Wednesday, April 03, 2019