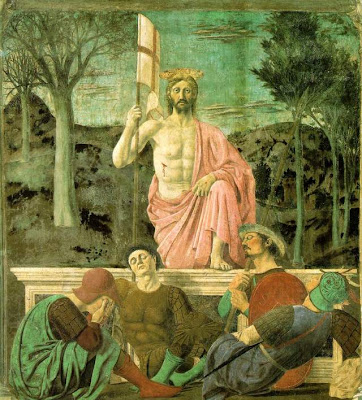 Through the resurrection, God fills the empty places in our lives. He does it for the initial followers of Jesus, for Paul, for the Christians of Corinth … and for us.

The Good News is that we don’t have to earn or deserve this gift of new life. What we have to do is believe and be willing to follow Jesus into the future He is preparing for us. Although the apostle Paul was the least of the apostles, “unfit to be called an apostle,” he believed in the resurrection. The result was that God’s grace toward him was not in vain, and he was able to spread the Gospel. Mary and her companions felt a disorienting mixture of amazement and fear on Easter morning, but they responded when the young man gave the command, "Go, tell his disciples and Peter that he is going ahead of you to Galilee; there you will see him, just as he told you."

Believe in the resurrection. Follow Jesus into the future. These are responses we can make, responses that can fill our massive voids.
Posted by Province of Meribah at Wednesday, April 24, 2019