The gray gloom and soddening drizzle seemed like cynicism itself had been turned to unwelcome weather.

And you might have expected that the prospect of trudging through it for hours would have kept most people away from the 17th annual 9/11 Walk of Remembrance, which retraces the steps of FDNY Chaplain Mychal Judge from Saint Francis of Assisi Church in mid-Manhattan to his death at the World Trade Center. 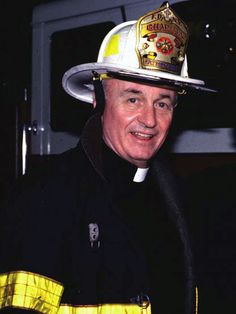 Yet despite even the added murk of the continuing sex abuse scandals in the Catholic Church, this particular church on West 31st Street in Manhattan was packed to capacity for the Mass preceding the walk on Sunday morning.

The surprise imparted by the standing room-only crowd was heightened by the sound that rose from before the altar with the homily. This was not the rote rumbling of some aging cleric grown

despondent in representing a dying institution. This was the vibrantly youthful voice of a priest on the job for just three years who had been grappling with a continuing crisis that had extended all the way to the Vatican.

Hansen was young enough just to walk away and set his life on another course. But he had the example of the fallen fire chaplain who had raced into the most mortal danger from this very spot. He also had the twinned example of the cop who had originally organized this memorial walk 16 years before.

Detective Steven McDonald had been shot and paralyzed from the neck down by a 15-year-old bicycle thief in Central Park in 1986. His wife, Patti Ann McDonald, had been pregnant with their first child.

The question of what kind of father he would be was swirling through McDonald’s mind when Judge filled in for a fire chaplain who was filling in for the police chaplain and visited him at Bellevue Hospital. Mychal introduced Steven to the Prayer of Saint Francis.

The contemplations of fatherhood and the words of the prayer joined what resided at McDonald’s core. The result was conveyed in a letter from him to the people of the City of New York that Patti Ann read aloud—he being unable to do so himself—at the christening of their son, Conor.

“On some days, when I am not feeling very well, I can get angry,” the letter noted. “But I have realized that anger is a wasted emotion, and that I have to remember why I became a police officer.”

The letter continued, “I’m sometimes angry at the teen-age boy who shot me. But more often I feel sorry for him. I only hope that he can turn his life into helping and not hurting people.”

The letter then said, “I forgive him and hope that he can find peace and purpose in his life.''

McDonald and Judge became as close as brothers, and some later called them twin towers of faith. They were really twin bridges, for they shared a belief that the sacred distance was not to tower over but to reach across. They also both believed that just as the devil is to be found in evil, then God is to be found in good. Judge felt certain that good and therefore God were stronger in McDonald than in anyone.

On 9/11, McDonald got the heartbreaking news that Judge had been killed, a photograph of his body being carried from the fiery ruins later to be called the modern Pieta. McDonald arrived at the medical examiner’s office and rolled his motorized wheelchair up to his friend’s mortal remain 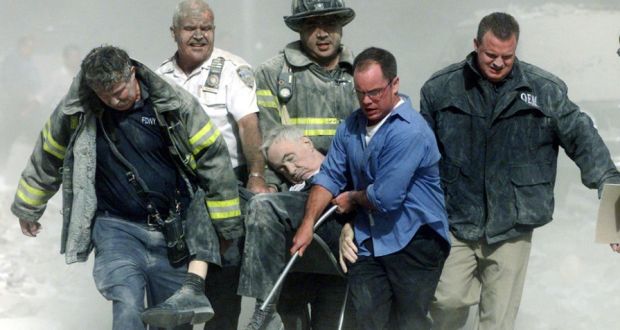 As the first anniversary approached, McDonald led the way in his wheelchair on the first Walk of Remembrance, pausing at the fire and police stations along the route as if they were Stations of the Cross. He and the others on the walk offered prayers for cops and firefighters from each command who had fallen on 9/11.

McDonald kept leading the walk for year after year after year. He was still doing so on the 15th anniversary, which happened to be the same day Mother Teresa was canonized in Rome.

“For the first time, we pray to Saint Teresa of Calcutta,” FDNY Chaplain Chris Keenan said during the Mass preceding that walk.

“We need heroes,” McDonald said that day in 2016 as if he were not one, as if he had not been Judge’s greatest hero, as if Judge had not believed that if anybody was going to be made a saint, it should be Steven McDonald.

Four months later, McDonald died, his lungs having failed after three grueling decades on a respirator, maybe an all-time record for anybody. His son, Conor, had joined the NYPD and had become a sergeant. He and his mother made sure the annual walk kept going.

“This was the most important accomplishment I think he did after he was injured, besides forgiving the young man that shot him and spreading his word of forgiveness and reconciliation,” Conor McDonald was quoted saying at last year’s walk, the 16th. “He put his heart and soul into this walk because Father Mychal meant so much to him.”

On Sunday, Conor and Patti Ann McDonald were back at St. Francis for the 17th. Everybody wished Steven and Mychal had possessed the powers from on high to stop the drizzle and clear the skies, but the unwelcome weather provided a challenge that made the turnout all the more heartening.

At a time when the Catholic Church seems endangered, here was a fine full house on a lousy day, the moment made perfect by Hansen’s vibrant young voice. He announced that the examples of McDonald and Judge and other first responders made clear to him how he should respond to the scandals. He would remain a priest and take on the problems.

“Human nature is really to go away from the problem,” Hansen said. “Then you had a group of people who are running straight at the problem. They said, ‘No, I’m going to go straight to the problem and try to bring healing.’”

In the outsized mosaic behind Hanson was a depiction of the small church of San Damiano, which was falling into ruin when Saint Francis stepped inside to pray before the crucifix. The saint is said to have heard a voice say, “Francis, go and repair my house, which, as you see, is falling into ruin.” Francis came to understand that the voice meant not this particular physical structure, but the church as a whole.

Hansen was now saying that by following the example of New York’s twin bridges and running straight at the problem, the church can be repaired.

At the end of the Mass, Conor McDonald rose with his mother from the front pew to lead this year’s walk. Hansen of course joined them, walking in the rain wearing only his clerical garb, politely declining the offer of waterproof gear.

One member of the procession remarked to him that there was serious talk that Steven McDonald might indeed be canonized.

And then the young priest continued with the others, shining in the soddening gloom as if he were himself the very stuff of hope.


The Daily Beast
Posted by Province of Meribah at Tuesday, September 11, 2018