Our Lady of Sorrows 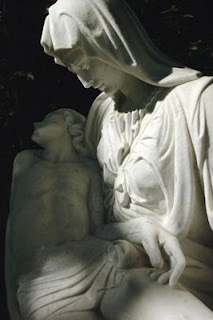 The Church commemorates Mary as Our Lady of Sorrows today. For many centuries, Christians have meditated upon the Seven Sorrows of Mary described in the Gospels.

Mary's first Sorrow was when she and Joseph brought the infant Jesus to the Temple at Jerusalem for His circumcision. For the Jews circumcision is a sign of their covenant with God, and the spilling of Jesus' blood in this Temple foreshadowed His eventual death sentence. This sealed the New Covenant in His blood.

At the Temple, Mary was met by the prophet Simeon. He told her that Jesus would be the promised light to both the Israelites and the Gentiles. Also, that Christ would also be rejected and that Mary herself would be pierced by a sword of sorrow. This is why in Christian art, Mary's heart is often shown wounded by a sword or swords.
Mary's second Sorrow came when an angel warned Joseph to flee to Egypt with Mary and Jesus. King Herod wished to destroy the child, and was willing to slaughter thousands of children in order to do so. For a man who was supposed to protect the people to show such hatred for innocent human life must have broken Mary's heart. This sorrow reminds us that it is the duty we have to protect innocent human life.

Her third Sorrow came when she and Joseph lost Jesus in the Temple. Years later, Mary would again lose Jesus in the Temple of Jerusalem during the Feast of the Passover. There, the religious leaders would once again question him, this time condemning him to die.

Mary's experienced a fourth great Sorrow years later, when she followed her Son out of Jerusalem as He carried His cross to the hill of Calvary.

Mary's greatest Sorrow, the fifth, was seeing her Son die. His hands had healed so many, even raising the dead back to life. Now His healing hands were held back by nails. The face that she once washed clean was covered in blood, the hair that she once combed now tangled in a crown of thorns.

Mary's sixth Sorrow was when Her son's lifeless body was taken down and given to her. Along with the other disciples, it was Mary's duty to clean the body and prepare it for burial. She suffered to bring Him into our world, to raise him, and now He dies to pay for our sins.

Mary's last Sorrow came when she buried her son. Jesus is now buried in a cavern carved into a rocky hill. Now He lies in a borrowed tomb. Buried in a simple white shroud.

On this day commemorating the seven sorrows of Mary we are called to imitate her, bravely accepting suffering, showing kindness to others who suffer. In a certain way, we can find joy and hope in knowing that Jesus has conquered suffering and death. His victory is our peace.
Posted by Province of Meribah at Saturday, September 15, 2018