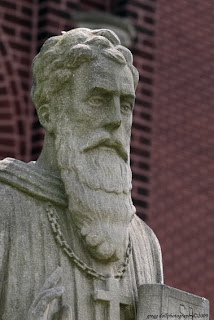 Few saints have left such a palpable impact on the world as St. Benedict, the monk whose Rule set a standard for the Western monastic tradition. His balance of work and prayer, his validation of community life, and his regulation of monastic discipline set the pattern for religious life for centuries. He died in Italy in the sixth century. Benedict was proclaimed Patron of Europe in 1964 by Pope Paul VI.

Marianists celebrate him as their Patriarch (cf. Rule of Life 4.10).

Today we celebrate the feast of Saint Benedict, Patriarch of Western Monasticism. In his Holy Rule, he begins by saying:

"Listen, O my son, to the precepts of thy master, and incline the ear of thy heart, and cheerfully receive and faithfully execute the admonitions of thy loving Father, that by the toil of obedience thou mayest return to Him from whom by the sloth of disobedience thou hast gone away.

To thee, therefore, my speech is now directed, who, giving up thine own will, takest up the strong and most excellent arms of obedience, to do battle for Christ the Lord, the true King.

In the first place, beg of Him by most earnest prayer, that He perfect whatever good thou dost begin, in order that He who hath been pleased to count us in the number of His children, need never be grieved at our evil deeds. For we ought at all times so to serve Him with the good things which He hath given us, that He may not, like an angry father, disinherit his children, nor, like a dread lord, enraged at our evil deeds, hand us over to everlasting punishment as most wicked servants, who would not follow Him to glory."
+ + +
Pray for the canonization of Blessed William Joseph Chaminade

"In centuries gone by the corruption had attacked only the heart; but today, mind and heart are gangrened, and the distemper of the mind is infinitely more dangerous and incurable than that of the heart. In this time of desolation . . . the yet unborn generation, as also others yet to come, are threatened with destruction by irreligion and impiety . . . How it must fascinate a soul thirsting for the glory of God and the salvation of men!"
Blessed William Joseph Chaminade
Posted by Province of Meribah at Tuesday, July 11, 2017