The Bread of Life

Our first reading is an account of the martyrdom of St. Stephen. As he faces his death, Stephen places himself into the hands of God. The beautiful psalm response for today echoes Stephen’s faith in the words “Into Your hands I commend my spirit.”

It is psalm of trust in God.

And Jesus, in the Gospel today, describes Himself as the Bread of Life which nourishes those who receive Him – and this nourishment is forever.

Stephen is the first martyr. We know the Greek word for “martyr” means “witness.” Stephen gives witness to his relationship with God by the ultimate sign of witnessing – his death. As a Spirit-filled individual and a man of faith and wisdom, he knows the cost of giving witness. In his final speech, Stephen reflects on the role of the prophets of old. They were persecuted by unfaithful individuals. Stephen is willing to take on the role of prophet (to speak for God) and to give witness to the relationship which God wants to establish with those who believe in the Lord Jesus. Thus, as he is being dragged out of the city of Jerusalem and stoned, he looks to the heavens and sees Jesus, his Risen Lord. He hands over his body to Jesus saying, “Lord Jesus, receive my spirit . . . Lord; do not hold this sin against them.”

One of those to whom he gives witness is a young man named Saul. 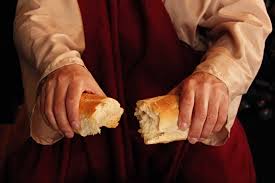 We may recall that Jesus has fed the multitude earlier in the sixth chapter of the Gospel of St. John. The people in today’s Gospel seek a sign from Jesus. They know Jesus is a great teacher and prophet like Moses of old. As God’s spokesperson, Moses “performed” many signs. Jesus reminds His listeners that Moses did not do the miracles. It was God who provided for the people. Jesus continues by saying that God is now providing an even better bread – a bread which gives eternal life. The people cry out for this bread. Jesus says that He is the Bread of Life. He is the One Who will nourish the believers in a way in which they will never want for any other food.

The readings today challenge us to look at our relationship with Jesus.

“Do I really seek Jesus as the source of our life?”

And I will only be able to do that if I feed on Jesus, the Bread of Life.
Posted by Province of Meribah at Tuesday, May 02, 2017