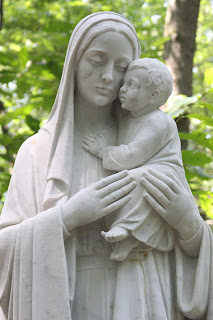 Devotion to Mary, which in the designs of Providence is supposed to characterize the last times and to give those times the primitive fervor of Christianity, has inspired in a great number of pious people, from the beginning of this century, the idea of consecrating themselves as religious under the auspices of this august Virgin, Mother of God. Several families have been formed. The principal ones, those who have had the greatest growth in the first half of this century, are the Society of Mary of Lyons and the Society of Mary of Bordeaux. The members of the first are called Marists, those of the second Marianists, and in spite of this distinction, they are perpetually confused.

Father Jean Philippe Auguste Lalanne, Marianist, first companion of Blessed Chaminade, in 1858
Posted by Province of Meribah at Wednesday, May 31, 2017