A few weeks ago, I was reflecting on a familiar passage from scripture. This passage from the Book of the Prophet Daniel (3:14-20, 91-92, 95) serves as the first reading for Wednesday of the Fifth Week in Lent. It is a passage, a story, that has always captured my interest and my curiosity. 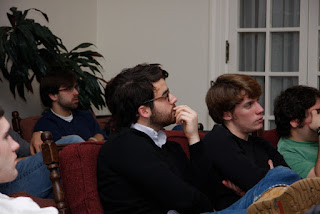 “There is no need for us to defend ourselves before you in this matter. If our God, whom we serve, can save us from the white-hot furnace and from your hands, O king, may he save us! But even if he will not, know, O king, that we will not serve your god or worship the golden statues that you set up.”

The king was pretty mad. The verse from Daniel paints quite a vivid picture of his anger: “King Nebuchadnezzar's face became livid with utter rage against Shadrach, Meshach, and Abednego.” He then orders the three young men thrown into the fiery furnace, heated seven times hotter than usual.

These situations in which we find ourselves pale in comparison to the situations in which our Christian brothers and sisters find themselves in parts of the Middle East and Africa. Hardly a day passes when we do not hear of some new atrocity committed against Christians in these parts of the world. During the Mass of the Holy Spirit at Catholic University to open the 2014-2015 academic year, Cardinal Donald Wuerl said, “Atrocities occur for two reasons. There are those willing to commit them and there are those who remain silent.”

In light of these reflections, my prayer for us this Easter season is twofold:

1. Should we ever be faced with such intense persecution, I pray that we would have the courage to stand up for our faith. I pray that, during any situation in which we encounter the least bit of resistance to our faith, we would not give in.

2. I also pray that we do not forget our suffering Christian brothers and sisters in the troubled parts of our world. We live in a crazy dangerous world. Let us be thankful for all the blessings we have received.

P.S. My goodness, time flies! It seems like only yesterday when we were all together for our January College-Age Retreat at Meribah.

Our next Retreat for College-Age Men will take place at Founder’s Hollow, “Do Whatever He Tells You: Vocation, Virtue, and Marian Courage” runs from Monday, May 22 through Wednesday, May 24, 2017. Our theme references one of Blessed Chaminade’s favorite quotations from Scripture. Our goal is to provide each and every retreatant with some down time to reflect on where he has been and where he is going in life. To register, enter the following link in your web browser: https://goo.gl/forms/45Yoa0dGhF7YjYhr1
Posted by Province of Meribah at Monday, May 01, 2017