Apparition of Our Lady of the Pillar 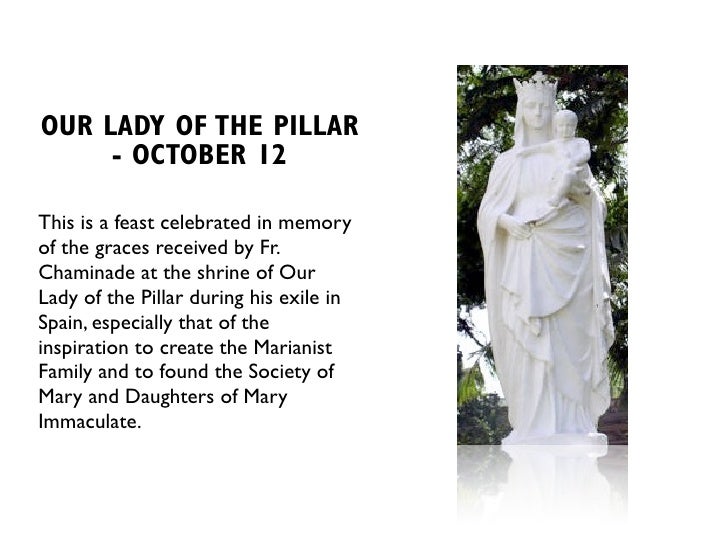 The Apparition of Our Lady of the Pillar was approved as a miracle by the Sacred Congregation of Rites on August 7, 1723.

"According to ancient and pious tradition, St. James the Greater, led by Providence into Spain, spent some time at Saragossa. He there received a signal favor from the Blessed Virgin. As he was praying with his disciples one night, upon the banks of the Ebro, as the same tradition informs us, the Mother of God, who still lived, appeared to him, and commanded him to erect an oratory in that place. The apostle delayed not to obey this injunction, and with the assistance of his disciples soon constructed a small chapel.”

The original chapel was eventually destroyed, but the pillar and the statue remained intact. Constantine ordered a Romanesque cathedral to be built over the site in the 4th century.

The most recent church, the Basilica of Our Lady of the Pillar, is Baroque in style and construction work on it began in 1681. The original building was finished in 1711, but there were additions as late as 1872.

Catholics who have prayed before the Altar of Our Lady of the Pillar include Saint John of the Cross, Saint Teresa of Ávila, Saint Ignatius of Loyola, Blessed William Joseph Chaminade and Saint John Paul II.
Posted by Province of Meribah at Sunday, October 16, 2016