With the outbreak of the French Revolution in 1789, and the anti-Church legislation that followed, it became impossible for Fr. William Joseph Chaminade, then age 28, to continue normal ministry.
Catholic priests were required to pledge an oath of allegiance to the government, instead of to the pope. About half did. Chaminade did not.

This refusal to align with the government could be fatal. A good friend and mentor of Fr. Chaminade’s, Fr. Jean Simon Langorian, was stabbed to death by a mob in July 1792. It was a desperate, dangerous time. 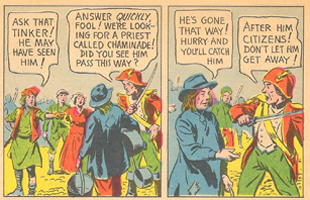 From a comic book titled, “In the Shadow of the Guillotine,” printed in 1943.
Chaminade became a member of the underground clergy. Working with a network of faithful co-conspirators in Bordeaux, Chaminade continued a clandestine ministry.
At times, he disguised himself as a tinker – a mender of pots and pans – so that he might move among his flock. During this shadowy existence, Chaminade performed baptisms and marriages, and he visited the sick and dying. (See a depiction of this in the comic book excerpted above.)

Eventually, Chaminade was forced into exile in Saragossa, Spain. There he conceived of a plan to restore Christianity in France. It is the progeny of this plan – the Daughters of Mary Immaculate and the Society of Mary – we celebrate in these bicentennial years.