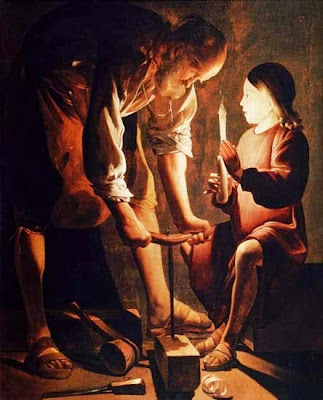 The Church officially celebrates St. Joseph twice in the liturgical year. March 19th commemorates his vocation as the husband of the Blessed Virgin Mary, and May 1st his vocation as a worker and provider.

Why this second feast day? Why is his role as a humble carpenter something to be celebrated over 2,000 years later?

St. Joseph’s most obvious mark in salvation history was his role as foster father to Jesus and husband to Mary. However, his humility and loving diligence as a hardworking yet poor provider serves as an example to all who work to fulfill a vocation or provide for a family.

He is also a model of trust in God. In spite of the fact that he could not completely understand God’s will, we know that he listened to God’s voice. In taking the pregnant Mary as his wife and later in abandoning his home to flee into Egypt, he shows us the importance of pure obedience to God’s call. (Imagine where we would be had he not listened!)

Pope Pius XII declared the feast day of St. Joseph the Worker in 1955 as a response to the increasingly communist climate of the time. It served as a reminder to the faithful of the dignity of work and the role of labor in glorifying God. Among other things, St. Joseph is the patron of the Universal Church and of social justice.