During his homily, Pope Francis reflected on the Book of Acts’ account of the election of Matthias to replace Judas as one of the Twelve Apostles in being “a witness to Jesus’ resurrection.”

The Pope observed that many people believed in the Resurrection through the testimony of these witnesses, and Christian communities were born.

The pontiff said that the faith in the risen Lord which exists today is based upon the Apostles’ witness passed down through the Church’s mission.

“Our faith is firmly linked to their testimony, as to an unbroken chain which spans the centuries, made up not only by the successors of the Apostles, but also by succeeding generations of Christians,” he said.


Pope Francis added that all those who follow Christ are called to be witnesses to the Resurrection, “above all in those human settings where forgetfulness of God and human disorientation are most evident.”


“If this is to happen, we need to remain in the risen Christ and in his love,” the pontiff explained.

The Pope reflected on how each of the newly canonized women bore witness to Christ’s Resurrection by abiding in his love and promoting unity among Christians.

Sister Jeanne Émilie de Villeneuve (1811-1854), was the French foundress of the Sisters of the Immaculate Conception of Castres.

In his homily, the Holy Father observed how she “consecrated her life to God and to the poor, the sick, the imprisoned and the exploited, becoming for them and for all a concrete sign of the Lord’s merciful love.”

Sister Maria Cristina Brando (1856-1906) was an Italian religious who founded the Congregation of the Sisters, Expiatory Victims of Jesus in the Blessed Sacrament at the beginning of the 20th century.

“She was completely given over to ardent love for the Lord,” the Pope said. “From prayer and her intimate encounter with the risen Jesus present in the Eucharist, she received strength to endure suffering and to give herself, as bread which is broken, to many people who had wandered far from God and yet hungered for authentic love.”

Sister Mariam Baouardy (1846-1878), a mystic and stigmatic also known as Mary Jesus Crucified, was the Palestine-born foundress of the Discalced Carmelites of Bethlehem. She and her family were members of the Melkite Greek Catholic Church. As a vowed religious, she spent time in France and India before helping to found the Carmelite congregation in Bethlehem in 1875.

“Poor and uneducated, she was able to counsel others and provide theological explanations with extreme clarity, the fruit of her constant conversation with the Holy Spirit,” the pontiff said. “Her docility to the Spirit also made her a means of encounter and fellowship with the Muslim world.”

The fourth newly canonized saint, Sister Marie Alphonsine Danil Ghattas (1843-1927), was a Turco-British Palestinian and co-foundress of the Congregation of the Rosary Sisters. Born in Palestine, she spent much of her life in Bethlehem and its area, assisting the poor and establishing schools and orphanages.

As the pontiff explained, she understood “clearly what it means to radiate the love of God in the apostolate, and to be a witness to meekness and unity. She shows us the importance of becoming responsible for one another, of living lives of service one to another.”

Pope Francis stressed the importance of unity in witness to the resurrected Jesus, reflecting on the day’s gospel reading in which Jesus prays “that they may be one, even as we are one” (John 17: 11).

“An essential aspect of witness to the risen Lord is unity among ourselves, his disciples, in the image of his own unity with the Father,” the Pope said.

He concluded his homily by inviting the faithful to imitate the four new saints, praying that we may “take with us the joy of this encounter with the risen Lord,” cultivating “in our hearts the commitment to abide in God’s love.”

At the end of Mass around noon, Pope Francis delivered a short pre-Regina Caeli address. He greeted all the pilgrims and delegates from Palestine, France, Italy, Israel, and Jordan present for the canonizations.

“Through their intercession, the Lord will grant a new missionary impulse to their respective countries of origin,” he said.

“Inspired by their example of mercy, of charity, and of reconciliation, Christians from these lands look with hope to the future, continuing on the path of solidarity and fraternal coexistence.”

The four newest saints showed how “to abide in God and in his love, and thus to proclaim by our words and our lives the Resurrection of Jesus, to live in unity with one another and with charity towards all,” the pontiff said in his May 17 homily

These women–two Palestinians, a Frenchwoman, and an Italian–offered a “luminous example” challenging the lives of Christians, he said.

“How do I bear witness to the risen Christ? How do I abide in him? How do I remain in his love? Am I capable of ‘sowing’ in my family, in my workplace and in my community, the seed of that unity which he has bestowed on us by giving us a share in the life of the Trinity?” Pope Francis asked.

Tens of thousands of people took part in the Sunday morning Mass, as tapestries bearing the images of the new saints hung from the facade of Saint Peter’s Basilica. 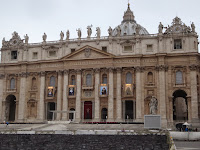