I want to see

Yesterday's Gospel from Saint Mark has a sightless man who sees Jesus clearly. 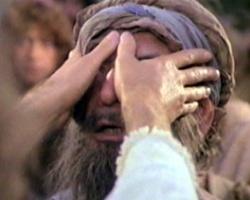 Only blind Bartimaeus correctly identifies Jesus as the long-awaited Son of David. The crowd is annoyed by his shouting, and they sternly order him to be quiet. It’s possible that they’re bothered by his brashness, feeling that blind beggars ought to be seen and not heard — from their perspective, he’s like a homeless person blocking the sidewalk, shaking a cup and asking for spare change. Or maybe they’re nervous because of what he’s saying, fearing that the long arm of the Roman military will bring the hammer down on anyone associated with a Jewish king.

In any case, Bartimaeus will not be silenced. He cries out even more loudly, “Son of David, have mercy on me!” His faith in Jesus will not be crushed by the criticism of the crowd, or by the fear of what Rome might do to someone speaking in such a politically incorrect way. He shows a level of courage in his convictions that is so rare in first-century, not to mention 21st century. He doesn’t care that the people around him are telling him to shut up. And he’s not concerned about the punishment he might receive for speaking openly about his faith. He just does it.

And the result? Jesus stops in his tracks and says, “Call him here.”

You get the feeling that the crowd goes silent at this point, surprised that a celebrity like Jesus would respond to the shrieks of a blind man sitting in the dirt. It’s as though a million-megawatt movie star is actually taking the time to talk to some nobody on the other side of the velvet rope. But the crowd passes the word to the blind man, and he responds by throwing off his cloak and springing up to meet Jesus.

Blind Bartimaeus knows that Jesus is the real deal. The true Son of David. A person with authentic mercy and awe-inspiring might — not some feel-good advertising icon. He’s so excited that he springs up and comes to Jesus, which is an act of real faithfulness for a man who can’t see where he is going.

“What do you want me to do for you?” asks Jesus when they are standing face to face.

“What do you want me to do for you?” is the question that Jesus puts before him. It’s open-ended. Non-directive. A blank check, just waiting to be filled in.

How would you respond, if you were blind Bartimaeus?
Posted by Province of Meribah at Friday, May 29, 2015