From Judaism to married Catholic priest


The Rev. Paul Schenck is a married Catholic priest.

You may think that's a poorly written sentence that should read "…a former Catholic priest who is now married." But, no, Schenck, of York, really is a married Catholic priest, one of about 200 in the nation and another 200 worldwide. He and his wife, Becky, have been married 37 years and have nine children, including "one in heaven." 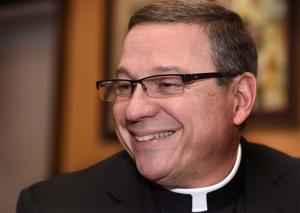 And that's not all. Schenck, 57, was raised Jewish, converted to Christianity at age 16 and was a Protestant pastor for about 20 years before becoming Catholic in 2004.

And there's more. Schenck served one month in prison and 18 months in home detention for leafleting and offering support to women and their companions at abortion clinics before the U.S. Supreme Court ruled in his favor in the 1997 case of Schenck v. Pro-Choice Network of Western New York.

Ordained in the Catholic Church in 2010, Schenk has served as director of respect life activities and continuing education for clergy in the Roman Catholic Diocese of Harrisburg since 2008 and chairs the Washington, D.C., National Pro-Life Center, an ecumenical mission at the Supreme Court, which he founded in 2004.

Wednesday evening, he spoke about his unusual faith journey at Theology on Tap, at Annie Bailey's Irish Pub on East King Street. About 35 people attended and were so spellbound that they didn't seem to move a muscle, except perhaps to widen their eyes or cover their mouths when they dropped open in shock and disbelief.

Ethan Demme, 32, of East Lampeter Township and a member of San Juan Bautista Catholic Church, South Duke Street, introduced Schenck at the social event for young adults, sponsored by the diocese and held about eight times a year on the second floor of the pub.

"It's a very compelling story," Demme said after Schenck spoke. "I really want to talk to him because I had a very similar journey."

Schenck's journey began in Western New York, where he was raised. There he attended Hebrew school for six years, learning Babylonian Aramaic. When he was in ninth grade, two classmates — one a son of a United Methodist minister and the other who became the first female minister ordained in the Evangelical Lutheran Church in America — introduced him to Christianity.

“I listened to them very closely," Schenck said. "I grew up in a home where Jesus was respected. I was told Jesus was a great rabbi that Christians mistakenly turned into a God."

He began reading the New Testament, which he found very familiar, with names such as Isaiah, Solomon and David and references to circumcision and bar mitzvahs.

"There was nothing non-Jewish about it," he said.

Schenck used the Yiddish word mishmash to describe his family, explaining that his mother was baptized a Catholic and raised an Episcopalian before marrying the son of Jewish refugees and converting to Judaism to please her husband's father. The priest, whose twin brother is a UMC pastor in Chicago, confirmed his mother and baptized his father in the Catholic Church before they died.

Schenck graduated in 1979 from Elim Bible Institute, in Lima, N.Y. He then attended the Institute of Jewish Studies at the State University of New York because he wanted to study the Old Testament in Hebrew. He graduated from Luther Rice Seminary in 1982.

By then, he and his wife, who married at 19, had six children and lived in a garage apartment without enough heat.

"We were in desperate straits, but we didn't know it. We were enormously happy. Our family life and ministry fulfilled us. Our children were our treasures and still are."

In 1984, Schenck read "The Jewish People and Jesus Christ after Auschwitz," by Jakob Jocz, a third-generation Jewish Christian from Ukraine and a professor at Wycliffe College at the University of Toronto. The two met and became colleagues, collaborating on a series of articles for the International Standard Bible Encyclopedia.

When Jocz died three years later, he left his entire library — four floors in a Victorian townhouse, to Schenck. In a journal on Judaica, Schenck found an article about a fragment in Hebrew found in Syria before the fourth century believed to be a Haggadah, a Jewish text of the order of the Passover Seder, but which on further study was found to be the oldest known Christian Eucharistic liturgy.

"I was convinced that the Church of the Apostles, the Hebrew speaking church of Jerusalem, was liturgical and Eucharistic," Schenck said. "That led me to conclude that the earliest church was Catholic."

Although Schenck was a Protestant clergyman, he said he felt Catholic. When he learned that Pope John Paul II would grant pastoral provisions to married Anglican priests, allowing them to become Catholic priests, he joined a Reformed Episcopal Church, a member of the worldwide Anglican communion.

"I have tremendous respect and admiration for my brother unmarried priests," Schenck said, "because they voluntarily surrender what is a right that every Christian man has — a wife and a family. They do that for the love of Christ and his church. And I think that's heroic."
Posted by Province of Meribah at Saturday, January 31, 2015