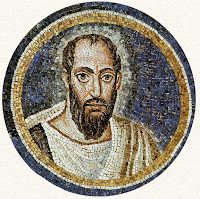 In prison in Rome, Paul wasn't merely concerned with where he was or where he should be. Rather, he also recognized something entirely foreign to most teenagers, young adults, and many of the rest of us: His life, Paul knew, was not his own. He could die at almost any moment, either at the hands of his captors or from the disease and other conditions in the Roman jails. Paul knew he had life at this moment, but he also knew it could be ended in an instant.

That's why Paul had a different sense of time than many to whom he was writing. Paul's view of the world was no longer seen through the earthly eyes of someone who aspired for mere worldly success and acclaim. Rather, his view was of an eternal prize, a "forever" home with Jesus.

It clearly changed Paul's focus from his wants to others' needs. The love of Christ for Paul made Paul love others more than he loved himself.

We see this repeated throughout Christian history. Martyrs in the church laid down their lives for the needs of those in their congregations. Maximilian Kolbe, a brave priest, substituted his life for another's at Auschwitz, and thereby gained freedom for another man.

It also changed Paul's view of what mattered in life. Before his Damascus road conversion, Paul was concerned with the approval of his peers in the Sanhedrin. Afterward, he wanted his life to reflect well on the cause of Christ.

What a recipe that would be for every church to follow.

Paul wanted to have a good report from this church not merely to assuage his conscience. His heart was at peace with God. Rather, he wanted the Philippians to live lives worthy of the gospel because such lives would be a powerful witness.

Paul saw a chance to see his struggle as a "privilege."

But Paul did, because his viewpoint was changed by an encounter with Christ. In seeing things with a new vision suffused with the Holy Spirit, he counted his trials a blessing. And he wanted the Philippians to do the same because they not only had the privilege of believing in Christ, but suffering for him as well.

Lance Rive is a name not very well-known in the Christian world, but his story should be told. Today he is a Salvation Army officer, an ordained minister of the gospel. A few years back, Rive was in a vehicle with his wife, being driven through the jungle roads in Africa. The car overturned, and he suffered a broken vertebra, leaving him a quadriplegic.

Here was a man in the prime of life, at the height of his career, reduced to utter helplessness. After months of therapy, he returned to his native New Zealand and a home specially built to accommodate his wheelchair and other needs. His wife works with him, as does a visiting nurse.

But instead of moping and complaining about this sad turn of events, Lance Rive took a different tack. With his wife's help, he logs on to a computer and answers, via e-mail, the confidential letters of thousands of people from around the world. Most don't know who is writing back to them, and almost no one knows the burden under which he works. Rive is able to turn that suffering into service, awaiting a day when his pain will end and the healing promised by Christ will become a reality.

In fact, that is what Christ Jesus expects of us today. It is what Paul encouraged the believers at Philippi to do. And it's why this Scripture comes to us, pointing us away from today's trials and conflicts, urging us to turn our eyes toward Jesus and toward the work he wants us to do.
Posted by Province of Meribah at Sunday, September 21, 2014