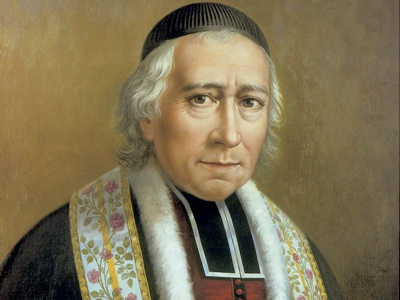 When Blessed Chaminade returned to France from Saragossa, he immediately began recruiting. He asked two young men who were coming to Mass to see him and to bring two others; then the four recruited four more. In a year the number had increased from a few to one hundred. Recruitment in other words was constant and universal.

But his recruitment was more than gathering numbers. He looked for persons who had a basic desire to live the Christian life, who wanted to join the Sodality he was forming, and who wanted to live by the promises they would make as members. There had to exist a basic belief system in the candidates. The geometric progression of sodalists happened by a process of one on one. His premise, simply stated, was that people desirous of living good Christian lives will find support for these values within a community of faith.

What is more, Blessed Father Chaminade did not just gather people; he wished to form them. His was a work of education. Later when he opened schools, his cry was the following: We teach only in order to educate. Education, for Blessed Chaminade, included using all the means that would help others be transformed into Christ. Such was the thrust of the Sodality of Bordeaux.

The Sodality had structures, rules, traditions. Because the members were being formed in the aftermath of the French Revolution, there was need for much religious formation. A new twist in Father Chaminade’s process, however, was that those who received formation were then enlisted to help in the formation of new candidates. Chaminade remained at the center of things, bu t he involved many members in various positions to help, and they took direct responsibility for their office. For example, in addition to the director of the Sodality—Father Chaminade—there was a prefect and a vice prefect. Each of these had two officers of honor. Sometimes, if important persons were visiting or had business with the Sodality, they would be named honorary prefects and would have two officers of honor. Jobs and roles were created in order to involve as many people as possible.

Principles of Direction of Blessed William Joseph Chaminade
by Paul Landolfi, SM
Posted by Province of Meribah at Wednesday, September 03, 2014