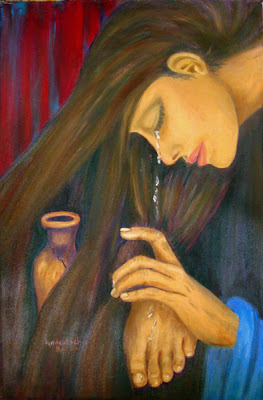 Our Gospel text today allows us to get a glimpse of the overpowering mercy of the Lord.

Jesus understood that the notion of jubilee debt cancellation would help Simon, a Pharisee and, as one well-trained in matters of the Mosaic law, to see the point of his parable. Perhaps, he might even interpret the presence of that out-of-place, uninvited woman as an opportunity instead of an intrusion. Simon easily reasons that in Jesus' parable, the man who is forgiven a debt of 500 denarii would "love" his creditor more than the man forgiven a debt of only 50 denarii. Receiving great forgiveness elicits great love, not only from the forgiven one, it would seem, but from the one who forgives as well. The forgiving creditor in Jesus' parable has enough compassion for those who owe him to cover a large amount of debt.

Jesus revealed to Simon that the weeping woman in the midst of this formal banquet had indeed many sins, but they had all been forgiven. The outpouring of loving thankfulness that bathes Jesus' feet with tears and then anoints them with oil demonstrates this woman's response to her forgiveness:  "She has shown great love."

"Where little has been forgiven, little love is shown."

"Where much has been forgiven, much love is shown."
Posted by Province of Meribah at Sunday, June 16, 2013