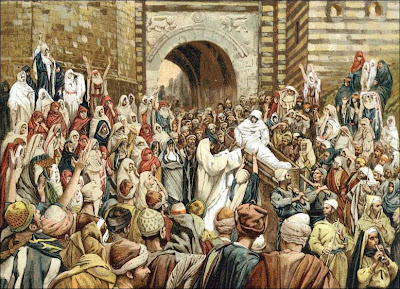 It's a unbelievable scene when you think about it -- I mean -- a funeral procession halted and the trip to the cemetery interrupted. Of course it was not anything like our scene -- a black hearse, followed by one or more black limousines, followed perhaps by several cars, lights on, concerned not to lose their place in the line in the traffic.

No, this scene was at once more primitive and personal. No city traffic to contend with in this procession. No indifferent motorists disturbed that they were delayed a few minutes for the funeral. No, this is a village scene, people on foot, following the widowed mother who is following the professional mourners with their cymbals, flutes and high-pitched shrieking and wailing.

It is a Palestinian village scene in Nain, just a short distance from Nazareth, and a day's walk from Capernaum. The pallbearers are carrying the body of a young man in a long wicker basket covered by a shroud for burial. Except for very important people, ancient Jews buried their dead outside the city, usually on the day of death or the next day. Embalming was not practiced.

For modern, indifferent eyes and blasé people, the scene was dramatic enough by itself. Think of it: the dead man was the only son of his mother, and she was a widow. The sorrow of the ages is contained in that statement. In a patriarchal society orphans, such as this young man, and widows, like his mother, were regarded as vulnerable, weak and without much opportunity for economic support. Nonetheless, a great crowd followed the procession, indicating sympathy and support at least for the time being.

That's drama enough -- a large crowd of caring people -- but now there is more. Jesus approaches, apparently coming from Capernaum. He saw the widowed, desolate mother, had compassion for her.

"Do not weep," he told her. Her tears for her son no doubt now intermingling with the endless salty tears shed for her husband. And in the continuing drama risking ceremonial impurity, he reached out, touched the bier and possibly the body, and the procession halted...he is healed.
Posted by Province of Meribah at Sunday, June 09, 2013