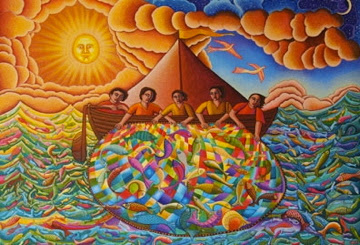 Nowadays, we’re at the Sea of Tiberias. Simon Peter and his fishing buddies are out on the lake trying to put their lives back together after witnessing the events of Holy Week. They fish all night and catch nothing, an experience that leaves them feeling fried, funky and frustrated.

Then a stranger appears on the beach at dawn. He calls out that they should "Cast the net to the right side of the boat." As if that will make any difference.


So they cast the net to the right, and the rest, as they say, is history. The net is so full of fish that they can’t haul it in. The apostle John now shouts that the stranger is the Lord. Simon does a double take, and he, too, sees that it is Jesus.

Within minutes, all of the disciples are on the shore with Jesus, and he directs them to give him some of the fish they had just caught. Peter leaps back in the boat and grabs the net of fish and hauls it to shore himself. A hundred and fifty-three fish in that net to be exact.

Meanwhile, a charcoal fire is lit, and the smoke is wafting through the cool morning air. and the fish is frying over the fire. Together they eat the fish and the bread.

When they finish eating, Jesus turns and says to Peter, "Simon son of John, do you love me more than these?" Peter says to him, "Yes, Lord; you know that I love you." And Jesus says to him, "Feed my lambs."

Without missing a beat, Jesus asks again if Peter loves him, and after Peter says that he does love him, Jesus says, "Tend my sheep."

Then again, as though the question had not been asked, Jesus inquires about Peter’s love. Peter is hurt by this persistent questioning, and he blurts out, "Lord, you know everything; you know that I love you."

Jesus commands him, once again, "Feed my sheep."

Feed my lambs. Tend my sheep. Feed my sheep. What is Jesus driving home in this dialogue with Simon Peter? On one level, he is giving Peter the opportunity to cancel out the three cowardly denials he made during Holy Week. Although Peter had insisted three times that he was not a disciple of Jesus, now he affirms three times that he loves his Lord. Three denials, three affirmations. The slate is now wiped clean.

But there is something more significant going on here, and it has to do with the work of tending Christ’s sheep. Jesus is laying out a sort of job description for disciple wannabes, people who will be involved in the day-to-day work of caring for the people of God.