Feast of Our Lady of Good Counsel 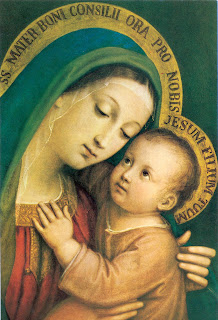 Holy Virgin, moved by the painful uncertainty we experience in seeking and acquiring the true and the good, we cast ourselves at your feet and invoke thee under the sweet title of Mother of Good Counsel. We beseech you: come to our aid at this moment in our worldly sojourn when the twin darknesses of error and of evil that plots our ruin by leading minds and hearts astray.

Seat of Wisdom and Star of the Sea, enlighten the victims of doubt and of error so that they may not be seduced by evil masquerading as good; strengthen them against the hostile and corrupting forces of passion and of sin.

Mother of Good Counsel, obtain for us from thy Divine Son the love of virtue and the strength to choose, in doubtful and difficult situations, the course agreeable to our salvation. Supported by thy hand we shall thus journey without harm along the paths taught us by the word and example of Jesus our Savior, following the Sun of Truth and Justice in freedom and safety across the battlefield of life under the guidance of thy maternal Star, until we come at length to the harbor of salvation to enjoy with thee unalloyed and everlasting peace. Amen.
(By Pope Pius XII, 23 January 1953)


The miraculous nature of the sacred image.

The image as it is known in the West is traced to the year 1467 to Genazzano, Italy, a small town ca. thirty miles southeast of Rome. It is presently located in a side chapel, built between 1621 and 1629, in the church of Our Lady of Good Counsel, when the image derives its name. Measuring approximately 15-1/2 inches by 17-1/2 inches, the painting is a fresco executed on a thin layer of plaster or porcelain not much thicker than paper. One writer describes it as a fresco painted on a material resembling egg shell. It appears suspended in mid-air in its frame, with approximately an inch of space between it and the wall behind it. The only support is on the lower edge where it "rests on a small base on one of its sides, i.e. from the center to the extreme right." (Joao S. Cla Dias, p. 42)

The image received its papal coronation on November 17, 1682. A canon of Saint Peter's chapter was sent to represent Pope Innocent XI. A report was written five days later describing the image as touching the wall only at the upper edge and not supported by other means. It is from this date on that the existence of the painting as such was considered miraculous, not only because of its arrival at Genazzano, but because it is for the most part suspended in the air. Eyewitnesses also testify to extraordinary phenomena regarding changing features of the image. Since that time, there have been many privileges granted to the shrine, papal visits and honors.
Posted by Province of Meribah at Friday, April 26, 2013