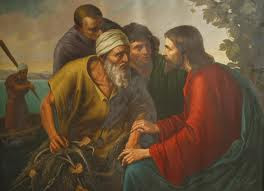 That's the nickname given by Jesus to James and John, the sons of Zebedee. They are two of the first disciples called by Jesus, a couple of guys in his inner circle.

Sons of Thunder: An awesome name for a motorcycle gang. Or a rock band.

But these two brothers think that it would be even better to be known as "the Great." So they walk up to Jesus and say, "Teacher, we want you to do for us whatever we ask of you."

Are they being presumptuous? Yes.

Out of line? Absolutely.

Jesus doesn't shoot them down. Instead, he says, "The cup that I drink you will drink, and with the baptism with which I am baptized, you will be baptized." He knows that they are walking the way of the cross, which will lead to suffering for all and to death for some.

We know James was later put to death by the sword.

James and John. Both suffered. One was martyred. They drank the cup and experienced the baptism.

But as for positions of honor, Jesus says: "to sit at my right hand or at my left is not mine to grant." Jesus can promise suffering, death and new life to all who follow him in faith, but the granting of special places in the kingdom of heaven? That's God's call, because God is in control.
Posted by Province of Meribah at Saturday, October 20, 2012