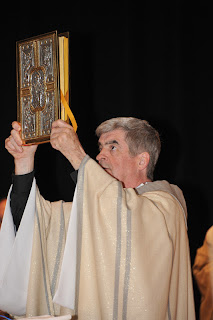 This "priest forever" stuff sounds rather strange to our modern ears, as foreign as the tales of Zeus, Hades, Poseidon and Kronos. True, the story of Melchizedek is told only once in the Bible, in the book of Genesis. There, Abram wins a great military victory, and after returning from battle is greeted by King Melchizedek of Salem, who is not only a king but a "priest of God Most High."

Melchizedek brings bread and wine to Abram and says to him, "Blessed be Abram by God Most High, maker of heaven and earth; and blessed be God Most High, who has delivered your enemies into your hand!" Then Abram gives Melchizedek one-tenth of everything he has gained in battle, a tithe of his goods.

Our Christian ears are bound to perk up when we hear this story because so much of it sounds oddly familiar. We think of Jesus Christ as a king and a priest, we partake of bread and wine in the Lord's Supper, and we know that we're supposed to give a tenth of our resources in support of God's work in the world. Strange how much New Testament theology is packed into these three Old Testament verses!

The readers of Hebrews knew this story even better than we do, which is why they'd be impressed by the description of Jesus as "a priest forever, according to the order of Melchizedek."

They would also know enough of the Hebrew language to pull apart the name "Melchizedek" into its component parts: melek, which means king; and sedaka, which means righteousness. New Testament professor Luke Timothy Johnson points out that the letter to the Hebrews also identifies Melchizedek as "king of Salem, that is 'king of peace,'" and the letter goes on to encourage us to pursue peace with everyone.

And Jesus as well.
Posted by Province of Meribah at Saturday, October 27, 2012