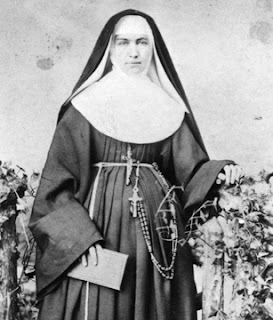 From the In My Backyard Desk…an observation, from Lawrence Downes in the New York Times:

When Pope Benedict XVI canonizes seven Catholic saints in Rome next Sunday, two Americans will be among them, bringing the total of American saints to an even dozen. That may seem surprisingly few after 500 years of Christianity in the New World, but the United States is still a relative newcomer in the Catholic Church, and these things take time.

What’s more remarkable, even astounding, is that seven of the 12 are New Yorkers — either native-born or with some other strong connection to the state, including the two newest, Kateri Tekakwitha and Marianne Cope.

Pennsylvania and Hawaii have two saints each. Indiana has one. For whatever reason — whether it’s something in the water or blowing down from French Canada, or welling up in the alluvial soil — New York is on its way to an All-Saints baseball team. It’s even more impressive when you add the players in the pipeline, like Dorothy Day, Pierre Toussaint, Cardinal Terence Cooke and Archbishop Fulton Sheen. You could even add Thomas Merton, who is not on the saint track yet but is thought by many to be on deck. (Yes, his monastery was in Kentucky, but he’s a son of Queens, Greenwich Village and Columbia University.)

…New York’s first three saints, Jesuit missionaries in the 1640s, did it the hard way. Isaac Jogues’s flesh was torn from his body by Mohawks. Jean de la Lande was tomahawked. So was René Goupil, with a blow to the head; today he is the patron saint of anesthetists. (Catholic worship can be literal like that; my namesake saint, roasted on a griddle, is the patron of short-order cooks).

The more recent saints led more sedate but no less accomplished lives. Elizabeth Ann Seton was born in New York City in 1774 and founded the Sisters of Charity, the first American order of religious sisters. Frances Cabrini worked with sick, hungry and orphaned Italian immigrants in New York in the 1890s.

Kateri Tekakwitha was a Mohawk from Auriesville, N.Y., who converted to Catholicism in 1676 and led a life of piety. Marianne Cope was a Catholic sister and hospital administrator. She worked with leprosy patients in Molokai, Hawaii, where she died in 1918. Hawaii claims her, but I’m counting her a New Yorker because she was raised in Utica and her order, the Sisters of St. Francis, is based in Syracuse, where her shrine is. The sisters pushed hard for Marianne’s cause, to the point of having her remains dug up on Molokai and taken back to Syracuse. This broke hearts in Hawaii, but the sisters’ New Yorky attitude was: you gotta do what you gotta do.
Posted by Province of Meribah at Tuesday, October 16, 2012