Yesterday was the feastday of Saint Bernadette Soubirous, the visionary of Lourdes — a woman brought up in such mean poverty that her whole family lived in the equivalent of a jail cell. She was a shepherdess; a poor student who could barely learn her catechism, yet was able to burst into her pastor’s office with the words “Immaculate Conception” pouring forth; a visionary who faced public ridicule for digging with her hands, until the healing spring showed forth the next day.

Last summer we spent two days on pilgrimage at Lourdes. All of our students were awestruck by the simplicity and the profound faith of all at Lourdes.

At age 22, Bernadette entered the convent of the Sisters of Charity in Nevers. Although she had many trials there, she happily performed the menial tasks assigned to her, working initially in the kitchen, then later as an assistant in the infirmary. In September, 1878, at the age of 34, Bernadette made her perpetual vows. After suffering heroically and secretly for years from tuberculosis of the bone in the right knee, which caused excrucixiating pain, she died a holy death on April 15, 1879.


St. Bernadette is the patron of: the poor, the sick, people ridiculed for their piety, and Lourdes, France. 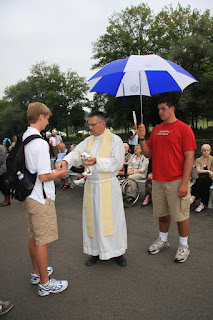