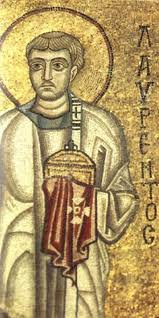 Although little known in American churches, St. Lawrence has been sculptured, painted and crafted in bronze or stained glass more often than almost any other Saint of the Christian Church. In England alone, more than 250 churches are named for him, as are six in Rome.

St. Lawrence was martyred in 258 A.D. But we remember him, not for his martyrdom, but for his being Archdeacon of Rome. His responsibilities included maintaining the sacred vessels of the small, struggling church and distributing alms to the poor. While he was Archdeacon, the Governor of Rome took Pope Sextus captive and demanded, "Where is the treasure of the church?" The Pope would not tell, and they tortured him to death. He never did tell, but in his agony and pain, Pope Sextus somehow mentioned the name of Archdeacon Lawrence. They took Lawrence captive.

"Where is the treasure of the Church?" they demanded, threatening with the same fate that befell the Pope.

Lawrence replied, "Governor, I cannot get it for you instantaneously; but if you give me three days, I will give you the treasure." The Governor agreed. Lawrence left. Three days later he walked into the Governor's courtyard followed by a great flood of people. The Governor walked out onto his balcony and said, "Where is the treasure of your church?"

Lawrence stepped forward, and pointed to the crowd that accompanied him -- the lame, the blind, the deaf, the nobodies of society -- and said, "Here are the treasures of the Christian church."

Are you there with St. Lawrence today?
Posted by Province of Meribah at Thursday, April 19, 2012