Holy Thursday: the love of Christ 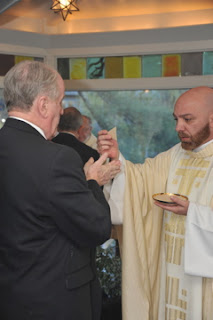 The Marianists of the Province of Meribah have gathered this week to partake in our traditional Holy week retreat. As part of our Holy Thursday retreat, we discussed TV pastor Robert Schuller and Archbishop Fulton Sheen.

We recalled the time Bishop Fulton Sheen spoke at the Crystal Cathedral. Fulton Sheen was one of the most effective religious communicators of his time. In the early 1950s his weekly television broadcast was the most popular program in the country. 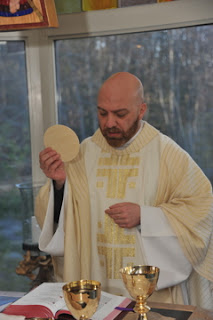 Because he was so popular, thousands of people came to hear Sheen at the Crystal Cathedral. After the message, he and Robert Schuller were able to get to their car only because a passageway was roped off. Otherwise, they would have been mobbed. Along both sides of the ropes, people were reaching out in an attempt to touch the bishop. It was as if the pope himself had come to town.

As Sheen was passing through this section on his way to his car, someone handed him a note, which he folded and put into his pocket. Then, as he and Schuller were on their way to the restaurant where they were going to eat lunch, Bishop Sheen pulled out that note, read it, and asked Schuller, “Do you know where this trailer park is?” Schuller looked at the note and said, “Yes, it’s just a couple of miles from here.” The bishop said, “Do you think we could go there before we go to lunch?” “Sure,” Schuller answered. “We have plenty of time.” So they drove to this little trailer park, and Bishop Sheen went up to one of the trailers and knocked on the door.

An elderly woman opened the door, and seemed surprised–flabbergasted, really–when she saw who had come to visit her. She opened the door and the bishop went in. After a few moments, he came out, got back in the car and said, “Now she’s ready for living–in this life and the next.”
Our homilist today also recalled this story as part of our Holy Thursday reflection: 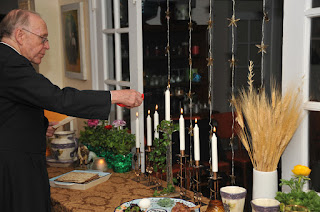 – “When I try to tell people what Ronald Reagan was like,” says Peggy Noonan, former White House speechwriter, “I tell them the bathroom story.” A few days after President Reagan had been shot, when he was able to get out of bed, he wasn’t feeling well, so he went into the bathroom that connected to his room. He slapped some water on his face and some of the water slopped out of the sink. He got some paper towels and got down on the floor to clean it up. An aide went in to check on him, and found the president of the United States on his hands and knees on the cold tile floor, mopping up water with paper towels. “Mr. President,” the aide said, “what are you doing? Let the nurse clean that up!” And President Ronald Reagan said, “Oh, no. I made that mess, and I’d hate for the nurse to have to clean it up.
Posted by Province of Meribah at Friday, April 06, 2012