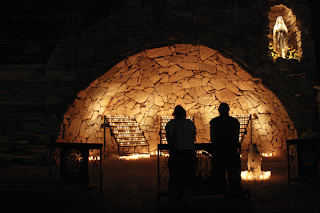 This is the seventh in a series of student reflections from the Life Teen Leadership Conference last summer. Over 500 young men and women gathered together to learn and express their faith.

Life Teen was truly one of the most inspirational, life-changing, and exciting events I have ever experienced. Throughout the week there were many speakers and talks that made me think deeper into my faith and examine my life more closely. Everyday included adoration, mass, evening prayer at the famous Grotto, and music by Matt Maher. You would meet teens the same age as us interested in their faith even more than us. We got to know the other kids by playing Ultimate Frisbee and soccer with them. Throughout the week, a few events greatly impacted me and I’m sure others as well.


Every day had many lectures that ranged from how to be a catholic hero to a special guy’s empowerment and ownership session. Every morning there was also the opportunity to attend Bible Study that was held by Mark Hart. The Bible Study was one of the most interesting lectures. Mark Hart was so enthusiastic into teaching the Bible to a bunch of teens. The way he spoke was so enthralling that the hour went by so fast and I was upset that it was over. Many of the speakers had this talent which made every lecture unique in its own way. Another impressive lecture was given by Christian Rock singer Matt Maher. He spoke about “Mary and the Magnificat”. This was an interesting lecture because it showed that Matt was not only a musician but that he had a lot of passion for his faith which he normally only shows through music.

The most powerful events of the week were Adoration, Confession, and Mass. Mass and Adoration were held everyday and Confession was held only one day. Confession was like no other Confession I had experienced. I was able to really examine my conscience and told the priest things I had held back on telling before. I had about a 15 minute conversation with the priest about how I could change my life by taking out the sins I had committed. Mass and Adoration were amazing. Everyday I looked forward to these two events. Mass was amazing because everybody wanted to be there. Everybody responded and sang along with Matt Maher and the band. We were all there to give praise to our Savior and be lucky enough to receive Him in the forms of His Body and Blood. One night Mass was held at the Grotto. This was nice because the candle-lit landscape gave the Mass a certain atmosphere. The priests were also able to keep us entertained by delivering great homilies. Adoration was usually held for about and hour. This was a special time because it was quiet time with periods of reflective music provided by the band. For an hour, we were able to be one-on-one with Jesus and reflect on our lives and how we could better our life.

There were many experiences throughout this one week; too many to recount. At the end of the week, we all wanted for the program to continue for another week. I hope to take these experiences from this week and use them in my future as a Catholic leader at school, in my family, and at my parish.

Danny Brandon
"Mary, the Mother of God! Indeed, the divine Maternity of Mary is a profound and incomprehensible mystery. To think that it was given to a feeble creature to call God her son, and to share not indeed with a mortal spouse, but with the Eternal Father himself the propriety, I dare say, of receiving the homage and filial tenderness of Jesus Christ. Yet this is the teaching of faith: Mary is the Mother of Jesus. Let us learn, then, through the Son to know his Mother."
Blessed William Joseph Chaminade
Posted by Province of Meribah at Monday, May 24, 2010