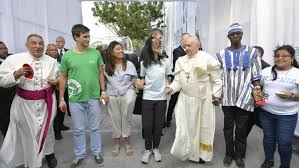 The theme of the fifth chapter is “A better kind of politic.”
It is here that we see one of the most valuable forms of charity because it is placed at the service of the common good and recognizes the importance of people, understood as an open category, available for discussion and dialogue. This is the populism indicated by Pope Francis, which counters that “populism” which ignores the legitimacy of the notion of “people”, by attracting consensuses in order to exploit them for its own service and fomenting selfishness in order to increase its own popularity. But a better politics is also one that protects work, an “essential dimension of social life”.
The best strategy against poverty, the Pope Francis explains, does not simply aim to contain or render indigents inoffensive, but to promote them in the perspective of solidarity and subsidiarity. The task of politics, moreover, is to find a solution to all that attacks fundamental human rights, such as social exclusion; the marketing of organs, tissues, weapons and drugs; sexual exploitation; slave labour; terrorism and organized crime. Finally Pope Francis makes an emphatic appeal to definitively eliminate human trafficking, a “source of shame for humanity”, and hunger, which is “criminal” because food is “an inalienable right."
Posted by Province of Meribah at Thursday, February 25, 2021