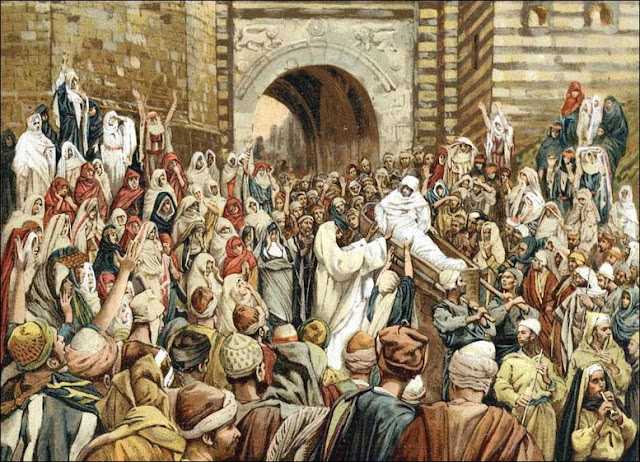 Our Gospel today is vividly called to mind with the image above. It calls to mind a funeral story. It is the story of the raising of the widow's son at Nain.

Nain was a small town in the Galilee region. As Jesus and his disciples arrived with a large crowd in tow, a funeral procession was heading out of the gate. A widow's son had died, which was a double tragedy. Not only would this woman have been grieving deeply over the loss of her only son, the funeral procession also meant that her own future was likely on the way out as well, since she would have no one to support her.

The procession was large because people normally dropped whatever they were doing to follow along. Fascination with death was a Jewish thing.  Funeral rites in ancient Israel followed very strict protocols. According to custom, the bereaved mother would walk in front of the stretcher bearing the deceased and no one but the closest family members would have touched the body as it was prepared for burial. Those in the crowd knew that just touching the stretcher would expose a person to a day's worth of ritual uncleanness, while touching the body would make you unclean for a week. The grieving mother, walking ahead of her dead son, was likely alone because she had been the one to wash and prepare the body for burial.

When Jesus saw her, "he had compassion for her." He says, "Do not weep," and then, shockingly, he touched the stretcher, exposing himself to the uncleanness of death. In this case, however, everything goes backwards. It's Jesus cleanness that transfers to the corpse. "Young man, I say to you, rise!" commanded Jesus, and "the dead man sat up and began to speak."

No doubt there were a few people who passed out. Some certainly screamed while others might have called the paramedics if there were any. Luke tells us, however, that, "Fear seized all of them; and they glorified God saying, 'A great prophet has risen among us!' and 'God has looked favorably on his people.'" While this was certainly an unusual event, the people of Nain also knew that it wasn't unprecedented. Immediately, they would have remembered the story of Elijah raising the dead son of the widow in Zarephath and would recognize Jesus as a similarly great prophet. As Elijah raised the widow's son and "gave him to his mother," so Jesus brought the widow of Nain's son back to life and "gave him to his mother."  Death was pushed back, the family restored, and new hope given.
Posted by Province of Meribah at Sunday, June 05, 2016