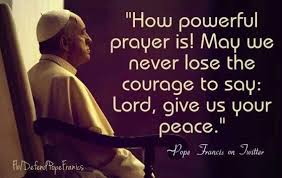 A compelling excerpt from a Papa Francisco homily:


Francis described an event that happened in the Shrine of Luján, in Buenos Aires, where there was a family with a nine-year-old daughter who was very ill. “After weeks of treatment”, the Pope recalled, “she did not manage to escape that illness, it had worsened and the doctors, at around six o’clock in the evening” said that she had only a few hours left to live. So “the father, a humble man, a labourer, immediately left the hospital and went to the shrine of Our Lady in Luján”, 50 kilometres away. When “he arrived around 10 o’clock in the evening, everything was closed, and he grabbed hold of the gate and prayed to Our Lady and struggled in prayer”. This, Pope Francis continued, “is a fact that really happened, at the time when I was there. And he remained like this until five in the morning”.

That man “prayed, he wept for his daughter, struggled with God for his daughter through the intercession of Our Lady. Then he returned. He arrived at the hospital at about seven or eight, and went to find his wife. She was crying and the man thought that the girl had died, but the wife said: ‘I don’t understand, I don’t understand…. The doctors came and said that they don’t understand what happened’. And the little girl went home”.

Essentially, the Pope observed, with “that faith, that prayer before God, convinced that he is capable of all, because he is the Lord”, the father in Buenos Aires recalled the woman from the biblical text. The one who not only obtained “the miracle of having a son a year later and then, the Bible says, she had many others”, but she also succeeded with the miracle of “awakening the tepid spirit of that priest”. When Hannah “explains to that priest — who had completely lost all spirituality, all piety — why she was weeping, he who had called her ‘drunk’, says to her: ‘Go in peace, and may the God of Israel grant you what you have asked of him’. He released from under the ashes the little priestly flame that was in the embers”.

Here then is the final lesson. “Prayer makes miracles”, Francis said. It even makes them for those “Christians, whether they lay faithful, or priests, bishops who have lost devotion”.

Additionally, he explained, “the prayers of the faithful change the Church: it is not we, the Popes, the bishops, priests, nuns who bring the Church forward, it is the saints! And the saints are these people”, like the woman in the Bible passage: “Saints are those who have the courage to believe that God is the Lord and that he can do all”. The Pope then prayed that the Father “give us the grace to trust in prayer, to pray with courage and also to awaken piety, when we have lost it, and to go forward with the People of God to the encounter with him”.
Posted by Province of Meribah at Saturday, January 23, 2016