On Tuesday morning, atop the cinematic steps of the Philadelphia Museum of Art, officials will unveil a special loan, in honor of Pope Francis – a monumental bilingual version of Robert Indiana’s famous LOVE sculpture.

AMOR will overlook the Benjamin Franklin Parkway where Pope Francis will conduct his papal Mass on Sunday, Sept. 27.

Officials at the Art Museum and the Association for Public Art, who arranged a four-month loan of the colorful six-foot sculpture, noted that amor means love both in Latin, the classic language of the church, and in Spanish, Francis’ native language.

The sculpture will face – at the opposite end of the Parkway – Indiana’s iconic LOVE sculpture, which rises from JFK Plaza, now popularly known as LOVE Park. 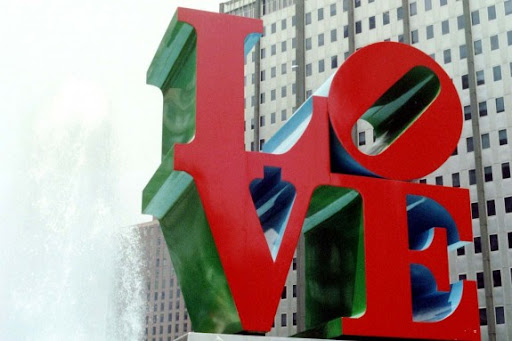 “With the installation of this generous loan atop our famous steps, we hope to add the most appropriate artistic note possible to Pope Francis’ visit to Philadelphia,” said Timothy Rub, Art Museum director. His visit comes at the climax of the World Meeting of Families, which begins the day AMOR is to be installed.

Penny Bach, executive director of the Association for Public Art, which has been acquiring public art for the city for well more than a century, called Indiana’s LOVE “the most recognized sculpture in a city known for having one of the largest collections of public art in the country.”

AMOR, Bach noted, will now be “in dialogue” with LOVE, which was installed in 1976 and donated to the city by the philanthropist F. Eugene Dixon Jr. She added that AMOR conveys the message that Philadelphia is “a welcoming city.”