“There is a responsibility to nurture the Earth, to nurture Creation”

Pope Francis: “There is a responsibility to nurture the Earth, to nurture Creation”

Christians are called to care for God’s creation. That was the Pope’s message at Mass this Monday morning at the Casa Santa Marta. The Holy Father also spoke about the “second creation”, the one performed by Jesus that he “re-created” from what had been ruined by sin.

God creates the universe but creation does not end, “he continues to sustain what he has created.” That was the focus of Pope Francis’ homily as he dwelt on a passage from Genesis, in the first reading, which recounts the creation of the universe. “In today’s Gospel”, the Pope commented, we see “the other creation of God”, “that of Jesus, who came to re-create what had been ruined by sin.” 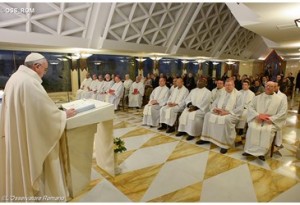 We see Jesus among the people, he said, and “those who touched him were saved” it is the “re-creation”. “This ‘second creation’ Pope Francis, is even more wonderful than the first; This second work is wonderful. “Finally, there is “another job”, that of “perseverance in the faith” that which the Holy Spirit works on:

“God works, continues to work, and we can ask ourselves how we should respond to this creation of God, which is born of love, because he works through love. In the ‘first creation’ we must respond with the responsibility that the Lord gives us: ‘The earth is yours, take it forward; let it grow ‘. Even for us there is a responsibility to nurture the Earth, to nurture Creation, to keep it and make it grow according to its laws. We are the lords of creation, not its masters. ”

The Pope warned, however, that we must be “careful not to become masters of Creation, but to make it go forward, faithful to its laws.” Therefore, he added, “this is the first response to the work of God: to be protectors of Creation.”
Posted by Province of Meribah at Friday, February 13, 2015